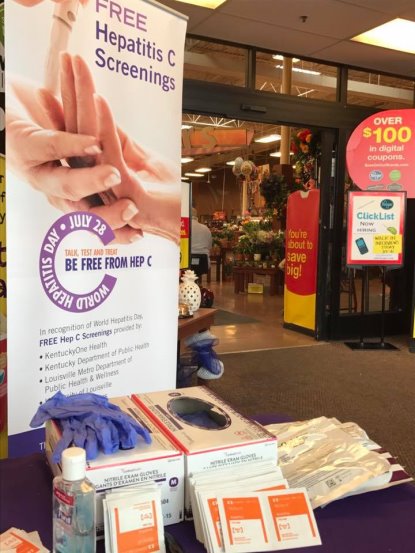 Hepatitis C, a blood-borne illness, is prevalent in the Louisville area and throughout the state. Currently, providers are encouraged to test for hepatitis C only in patients with certain risk factors or are from the Baby Boom generation (born 1946-1964).

“A growing body of evidence suggests age and risk-based screening is missing a significant number of people, including children, with hepatitis C infection. Universal hepatitis C screening will be a future standard of care,” said Barbra Cave, a family nurse practitioner specializing in gastroenterology and hepatology who leads the Hep C Center at UofL Hospital. Cave is helping to organize the event.

Kentucky has one of the highest hepatitis C infection rates in the country – seven times the national average. “Up to half of patients who have it may not know they are infected, and people may carry the disease for decades before they have symptoms,” Cave said.

While in the past certain groups were known to be at risk, Cave said a recent spike in hepatitis C cases among those who have no or unrecognized risk factors has prompted health officials to consider screening all adults. This spring, the state of Kentucky passed a law requiring all pregnant women to be tested for hepatitis C, as the disease can be passed from mother to baby. The law went into effect July 1. Kentucky is the first state in the nation to require universal hepatitis C screening in pregnant women.

“The goal of the World Hepatitis Day screening event is to expand testing and awareness, link more people to curative treatment, and normalize the conversation about hepatitis C,” said Cave. “There should be no stigma surrounding hepatitis C. Anyone could have it, including babies.”

Screenings will be offered from 10 a.m.-6 p.m. on Saturday, July 28. Screening is done with a simple finger prick, similar to checking a blood sugar, and results will be available on site in 20 minutes. Hepatitis C experts will be available at all sites to answer questions, and help link those affected by hepatitis C to appropriate care.

This is the second year UofL Hospital and community partners are offering the free screenings on World Hepatitis Day. Screening sites, staffed by more than 130 health care volunteers, will be set up in Louisville and Jefferson County, along with sites in Oldham, Shelby and Bullitt counties and Clark County, Ind. Last year, 488 people were tested. Cave said she hopes to double that number this year.

There are some known risk factors for hepatitis C:
• Born between 1945 and 1965. The U.S. Centers for Disease Control and Prevention recommends screening for all baby boomers.
• A blood transfusion or organ transplant prior to 1992
• Had blood filtered by a machine (hemodialysis) for a long period of time because kidneys were not working
• IV drug use at any point in life, even if just once
• Intranasal drug use at any point in life
• HIV or hepatitis B infection
• Healthcare workers exposed to blood through a needle stick or other contact with blood or bodily fluids
• Exposure to contaminated tattoo equipment, including ink
• Men who have sex with other men
• Prior military service. “Older veterans are particularly at risk due to the use of the old ‘jet gun’ vaccinators by the military, and from combat injuries requiring blood transfusion,” Cave said.

Contaminated dental equipment, such as that used before most items were single patient/single use, may have also spread hepatitis C, and Cave said the virus can live on a surface for six weeks if not sterilized properly.

But there are many cases of hepatitis C that are not tied to any risk factors, Cave said.

Left untreated, the disease can cause major complications. It can cause cirrhosis of the liver or liver cancer, and is a leading cause of liver transplant. Hepatitis C may also predispose those infected to diabetes and depression, and has an association with joint pain, certain skin disorders and lymphoma.

World Hepatitis Day is marked across the globe on July 28 every year. The purpose is to increase awareness of viral hepatitis, including hepatitis A, B and C. “We have a local goal to decrease the stigma about hepatitis C, and let people know it is easy to test for and treat,” said Cave.

“Some may still remember the old days of treating hep C when treatment was difficult,” Cave said. “It involved a triple therapy with interferon that lasted almost a year, with multiple side effects. Not everyone was a candidate for treatment, and some patients opted to not get treated at all.

“Today, hepatitis C is easily curable and relatively inexpensive to treat. Treatment is one pill, once a day, for 8-12 weeks – with minimal side effects. It is covered by almost all insurance plans, including Medicare and Medicaid. Cost and side effects are no longer an excuse to defer treatment.”