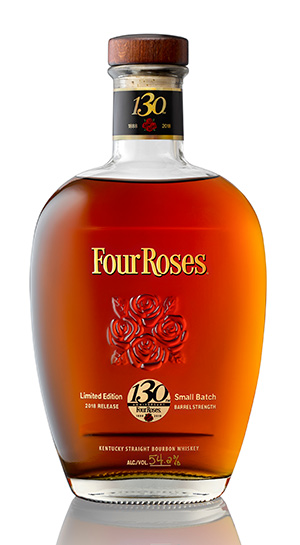 LAWRENCEBURG, Ky. — This year, Four Roses is raising a glass and toasting its 130th anniversary. To celebrate, the distillery will issue the newest release in its series of limited-quantity special bottlings – the 130th Anniversary Limited Edition Small Batch.

This very special bottling commemorates the brand’s 130-year history of handcrafting quality bourbon and the love story that started it all.

The bottling will launch during Bourbon Heritage Month this September. It will first be available in limited quantities at the Four Roses Distillery and Warehouse & Bottling Facility Visitor Centers on Saturday, Sept. 15 beginning at 9 a.m. The Limited Edition Small Batch will roll out to additional select retailers in the weeks following.

Four of Four Roses’ unique bourbon recipes were selected for the 130th Anniversary Limited Edition Small Batch. This bottle will feature a 10-year-old bourbon from the OBSV recipe, a 13-year-old OBSF, 14-year-old OESV and 16-year-old OESK.

Four Roses is the only bourbon distillery that combines two mashbills with five proprietary yeast strains to produce 10 distinct bourbon recipes, each with unique characteristics.

“For this Limited Edition Small Batch, I wanted to create something very special to celebrate the 130th anniversary of our brand,” said Elliott. “From the beginning of the process, I focused on building around the unique fruit flavors in our F and V yeast strains, and these flavors shine through in the finished product. As a contrast, I also included a spicy, older batch. By mingling these different flavor profiles, I think we achieved a wonderfully balanced, complex and unique bourbon. I could not be happier with the result and can’t wait for you to taste it.”

Bottled at barrel strength, 108.3 proof, the 130th Anniversary Limited Edition Small Batch offers rich vanilla, raspberries and ripe berries, and crème brulee on the nose. As it hits the palate, it opens into flavors of apricot, mint, cinnamon, apple and mellow oak. This bourbon boasts a very long finish, with hints of cinnamon, more fruit and vanilla.

Four Roses will distribute approximately 13,140 hand-numbered bottles of the 130th Anniversary Limited Edition Small Batch Bourbon in the United States with a suggested retail price of $140.

To learn more about how you can join Four Roses in celebrating its 130th Anniversary, visit FourRosesBourbon.com/130th.