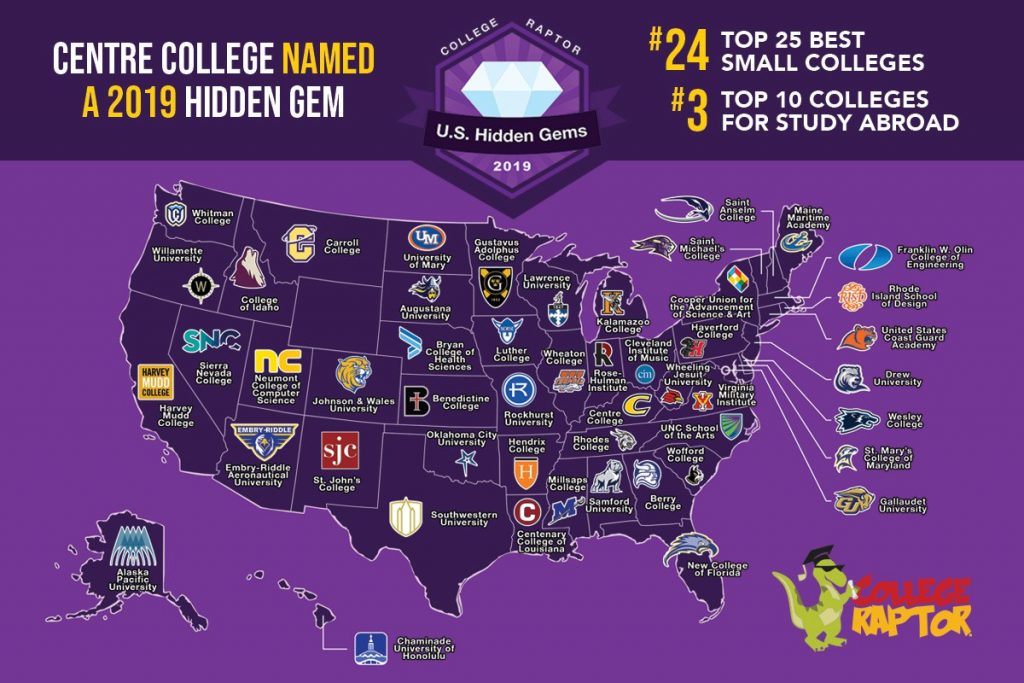 DANVILLE, Ky. — At a time when college rankings have become a cottage industry, with each new “best” list competing for its own luster by devising increasingly complex and novel methodologies, it’s refreshing to see that what started out years ago as a simple college planning tool created by a dad for his own college-aged children is standing the test of time.

And the endearing name and logo—College Raptor, with a nod to the velociraptor and other bird-like dinosaurs of the Mesozoic period—combine for a memorable brand that sticks easily in the brain.

The crown jewel in the College Raptor rankings has been the “Hidden Gem” list, which ranks each state’s best college that has at least 1,000 students and routinely receives 5,000 or fewer applications.

For the fourth year in a row, Centre has been named best in Kentucky on the “Hidden Gem” ranking, along with sister institutions across the country like Harvey Mudd in California, Haverford in Pennsylvania and Whitman in Washington state.

In addition, Centre was ranked 24th in the nation in the “Best Small Colleges” category, keeping company with a who’s who list of the best of the best in America, including places such as Amherst, Davidson, Julliard and Pomona.

First-year retention is most heavily weighted, a category where Centre currently boasts a 91 percent rate. Median SAT/ACT is second, and the midrange for Centre’s incoming class is 27-32, based on superscoring, with a median of 29.

From there, additional factors include average faculty salary, student-to-faculty ratio, a selectivity index, endowment per student and both four and six-year graduation rates. Centre is particularly strong in graduation rates, with four-year percentages consistently in the low to mid-80’s and the current senior class at 87 percent.

Centre also earned the 16th spot in the “Top 25 Best Colleges in the Southeast” category, which includes smaller places like Centre along with flagship public universities such as the University of Virginia and University of North Carolina, and large private institutions like Duke, Emory and Vanderbilt.

Among its peers in size and focus, Centre comes in at 4th in the Southeast, behind only Washington and Lee, Davidson and the University of Richmond.

In the “Top 10 Colleges for Study Abroad” list, Centre lands in the same spot it has in the U.S. News & World Report, Princeton Review and Institute of International Education rankings: #3 in the nation.

Unique among the nation’s study abroad programs, Centre has semester-long residential programs in 12 countries, with most of the experiences directed by Centre faculty, along with shorter-term courses in January and the summer in 45 more countries.