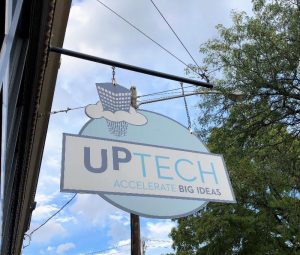 COVINGTON, Ky. — Ever on the lookout for creative ways to improve the services it delivers residents, Covington City Hall has entered a formal partnership with UpTech Inc., a nationally ranked business mentoring program that brings innovative and data-driven startups to Pike Street every fall.

In addition to letting city leaders tap the ideas and products of the startups, the arrangement also could mean a deeper pool of high-growth, viable, and investable businesses in Covington.

“Ultimately it just comes down to better utilizing — and keeping — some of the talent in our backyard,” said Covington Economic Development Director Tom West. “It’s also a matter of obtaining a tangible return on the city’s investment.”

UpTech is a seed accelerator program that every year brings six to 10 startups to Covington from not only other states but also Ireland, Latvia, Luxembourg and India. The five-month program — which is driven by intensive entrepreneurship education, one-on-one mentoring, and extensive community involvement — aims to turn the fledgling, cutting-edge businesses into companies worth investing in.

For example, one company in the recently started seventh class, or “cohort,” focuses on using advanced data capture and analysis to help cities manage parking better. Another analyzes sales calls to improve communication and chances of success. A third seeks to help team leaders harness the power of employee relationships to enhance performance and morale and reduce attrition.

Since 2012, UpTech has launched 53 startups and invested almost $2.6 million in them, and those companies have attracted over $6.6 million so far in outside funding, a number that Woodruff expects to grow soon.

As such, UpTech has been a key player in a hub of technology and innovation that has established itself around Innovation Alley in Covington, deepening a culture that has helped attract liked-minded businesses and support firms.

Woodruff said several graduates of the program — CitiLogics: Innovative Water Analytics, iReportSource, glimmar, and Apex Sports — still operate in Covington. Others like Hapzing have remained in the region.

“It’s a good time to convince businesses to set up shop here,” he said. “If you’re trying to hire a good team, Covington has a lot of amenities and attractions now, and it’s cheaper (than other areas).”

Through a lease subsidy arrangement involving the building at 112 Pike Street, the city has for five years provided just over $37,000 a year in support of UpTech to encourage job creation and entrepreneurship.

That five-year deal began in 2013 and expires this month.

“Since the day we started, the city has been one of UpTech’s biggest supporters,” Woodruff said. “We’re excited to expand that support into an active partnership that will benefit both Covington and our startups. We think that helping to solve some of the city’s most challenging problems through entrepreneurship is one of the best ways we can give a return to its investment in our program.”

As part of the partnership:

• On Oct. 30, the companies will come to city hall to “pitch” their services, products and expertise to department heads.

• UpTech will recognize the city as a sponsor at all events, and an Economic Development staffer will attend events to showcase the city as a resource.

• UpTech will coordinate a “hackathon” to tackle a city-identified problem, bringing together the various companies during a 24-hour event to present solutions to that problem.

“We want to get each cohort plugged into our community better, then utilize its ideas to help us deliver better services to Covington taxpayers,” West explained. “The bottom line is that we’re committed to UpTech and the startups it mentors, and we want to find ways to keep that talent in Covington after they complete their time with the program.”