ERLANGER, Ky. — The U.S. Department of Transportation released its average airfare ranking report for second quarter 2018, and the Cincinnati/Northern Kentucky International Airport (CVG) is again the lowest fare airport in the region. Among the top 100 U.S. domestic airports, CVG ranked 82nd, one of the best rankings achieved by CVG since the report was first published in 1995.

Overall, airfares at CVG have dropped 43 percent and passenger traffic has increased 54 percent in the last four years.

“CVG has the lowest fares in the Tri-State because of the incredible positive response from the community,” said Candace McGraw, chief executive officer, CVG. “As our passenger traffic increases, and airline competition increases, airfares go down. CVG passengers are paying on average $240 less per ticket than they were four years ago.” 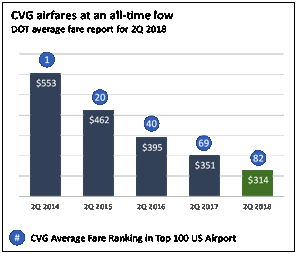 Below is a summary of the report as it relates to CVG: