Home » Can Trees Make You Healthier? 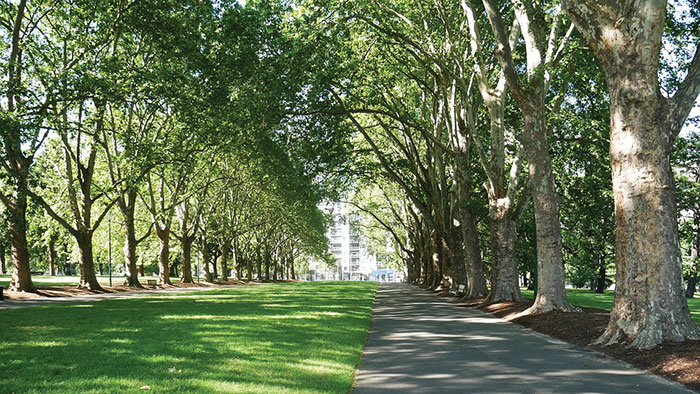 We all know that it’s good to include leafy greens in our diet, but could simply living around the leaves of trees and shrubs help make us healthier as well?

In a first-of-its-kind study, researchers from the University of Louisville Envirome Institute are working with a neighborhood in south Louisville to answer that question.

The University of Louisville has been selected to receive a five-year, $3 million grant from the National Institute of Environmental Health Sciences of the National Institutes of Health to help fund The Green Heart Project. The university has also received a $2 million grant from The Nature Conservancy to support the endeavor. Aruni Bhatnagar, director of the Envirome Institute and the Smith and Lucille Gibson Chair in Medicine, will lead the project.

“People appreciate trees and they’re aesthetically pleasing, but whether they actually have specific quantifiable health-promoting effects by removing pollutants from air has never been rigorously tested,” said Bhatnagar. “Through The Green Heart Project, we are changing that.”

According to the Envirome Institute, more than half the world’s population resides in urban areas, which have higher than average levels of air pollution. Air pollution is a significant contributor to cardiovascular disease and is linked to 7 million premature deaths worldwide annually, 200,000 in the United States alone.

Bhatnagar and his team will include 16 low-vegetation neighborhood clusters in Louisville to examine the impact of urban greenery on their health. The researchers are recruiting 700 community participants within the 16 clusters for the study. The team will examine blood, urine and hair samples to assess cardiovascular health.

In eight of the clusters, the team and their partners will plant as many as 8,000 native trees of all sizes. Shrubbery and grasses will also be planted to further optimize the ability to filter pollutants from the air.

Two years later, the researchers again will collect samples from the volunteers and analyze the differences. They also will compare the results to those from the participants in the eight neighborhood clusters that did not live in the areas that had the plantings.

“We believe that the greening of the neighborhoods will positively impact not only the air quality, but also the health of the people who live in those areas,” Bhatnagar said. “If we are correct, we may be able to create new strategies for the prevention of cardiovascular disease. The results of this project also will provide new insights into the effects of urban vegetation on community environment. These findings will be relevant to the development of new public health polices and the optimization of ongoing planting efforts in cities around the world to enhance public health.”

Closing the Deal over Dinner
The Value of Public Art