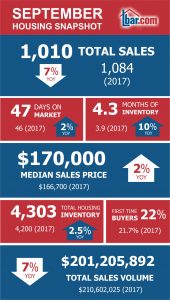 New construction homes experienced a price decline in September with the median dropping just over 7 percent to $239,525 in 2018, down from $259,900 in 2017. Compared to the previous month, September’s median price of new construction properties was up 6 percent.

On the national level, median prices were up 4.2 percent in September, reaching $258,100 in 2018 and marking the 79th straight month of year-over-year gains.

“Low inventories through the year have continued to push up prices in most counties in our area,” according to John Groft, 2018 president of LBAR. “September marked the first month this year where the available inventory of homes increased compared to 2017. New homes on the market increased as well. If we continue to see inventory levels rise over the next several months, it will certainly help move buyers into homes.”

Total housing inventory at the end of September increased 2.5 percent to 4,303 homes available for sale, up from 4,200 homes available this time last year and up 2.6 percent from the previous month when inventory levels were 4,192.

According to Groft, “Looking at the real estate environment here in Kentucky and across the nation, sales activity has slowed. Nationally, sales are down to the lowest levels since November 2015 due in large part to mortgage rates hitting a decade high. Buyers are still very active in the market however, we may start to experience longer wait times before they place offers on properties.”

This is reflected locally by the average days on market (DOM), which increased for townhouses and condos by 27 percent in September from a year ago, rising to 71 days from a previous 56 days. For single-family homes, average DOM remained flat year-over-year, although it was down 6 percent, to 45 days, compared to the previous month. The number of homes that sold within a month of being on the market dropped from 66 percent to 64 percent.

First-time buyers made up just over 22 percent of the market in September, the same as it was in the month prior, but increased from 21.7 percent from September 2017.