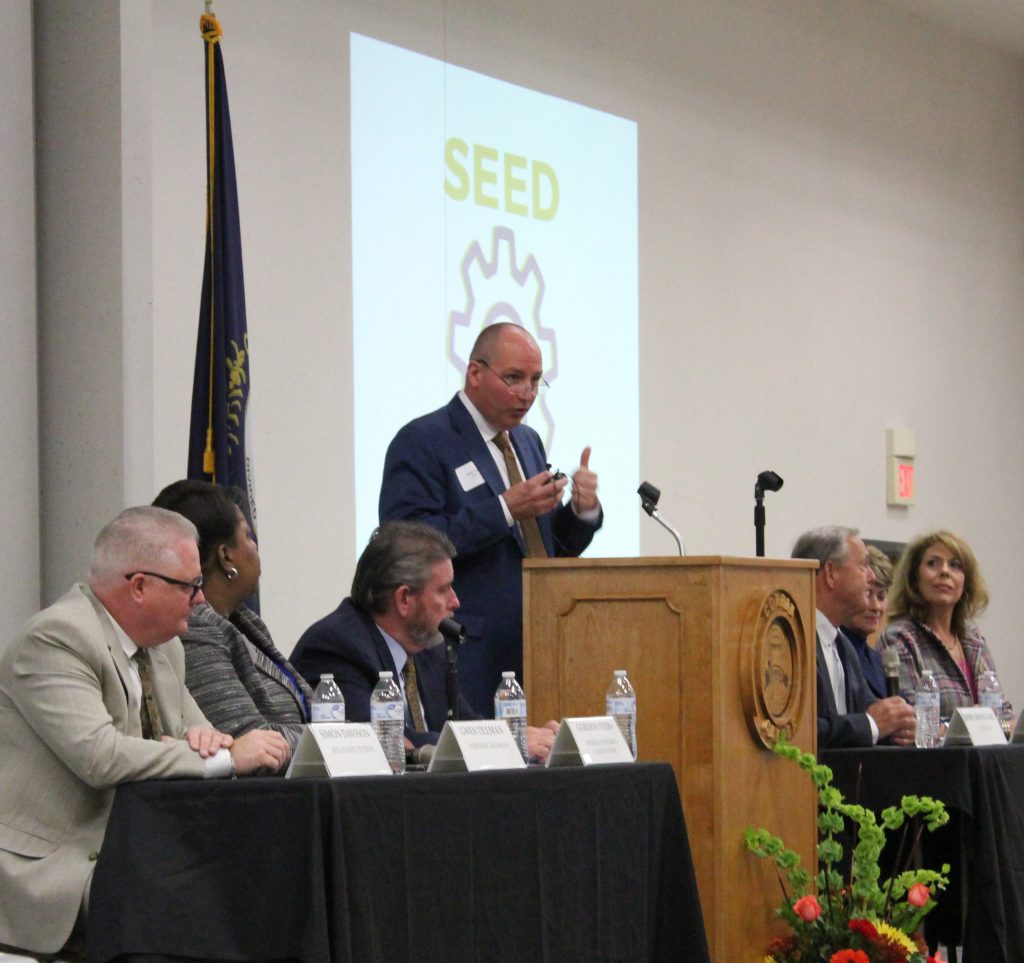 Representatives from some of the world’s biggest defense contractors gathered in Corbin earlier this month for the Second Annual event held at The Corbin Center in Corbin.

The event is a collaborative effort between the office of Fifth District Congressman Hal Rogers and the Southeast Kentucky Economic Development Corp. (SKED). Rogers was the keynote speaker at the event.

“We have the best workforce in the country with skilled machinists readily available for employment,” said Congressman Rogers, who launched SKED in 1986 to help create more jobs in Kentucky’s Appalachian region. “The SEED Symposium invites prime U.S. Defense and non-defense contractors to see first-hand the type of work we are capable of producing in Eastern Kentucky. I believe we are well-equipped to provide greater support for our major automobile manufacturers and our warfighters by producing the materials and equipment they need right here in the Appalachian region.”

The event is designed to connect major industry representatives with Eastern Kentucky’s most successful small manufacturers. The goal is to provide more opportunities for increased value for major firms and at the same time provide economic revitalization in Kentucky’s coal country.

Nearly 30 Eastern Kentucky-based businesses attended and were given the opportunity to meet with officials from a number of different large companies looking for subcontracting work.

Summit Aviation, of Somerset, is one of those small businesses. Summit Aviation Director of Manufacturing Scott Roush says this year’s symposium has already created new work for the local business.

“The Second Annual SEED conference is going to produce immediate new work for Summit Aviation,” he said. “The collection of manufacturers this year was incredible and gave us opportunities that we would have a difficult time netting on our own. Hopefully, we can continue to grow the event each year.”

There were a total of nine major prime contractors represented at the event that included Northrop Grumman, Boeing and Lockheed Martin, among others. In addition, this year’s lineup included representatives from Toyota, Big Ass Fans and GE Appliance.

General Dynamics Land Systems was represented at the symposium by Gordon Stein, the company’s vice president for global supply chain. He shared information as a member of the prime panel.

“General Dynamics was proud to support the second annual Kentucky SEED event,” Stein said. “Chairman Hal Rogers’ vision for a robust economy in southeast Kentucky demonstrates his investment in the future of Kentucky and underscores his commitment to maintaining a strong national defense. I made many valuable connections with local companies at the event and look forward to pursuing those partnerships in the future. Thank you to Chairman Rogers for his leadership and thank you to SKED for including General Dynamics at the event.”