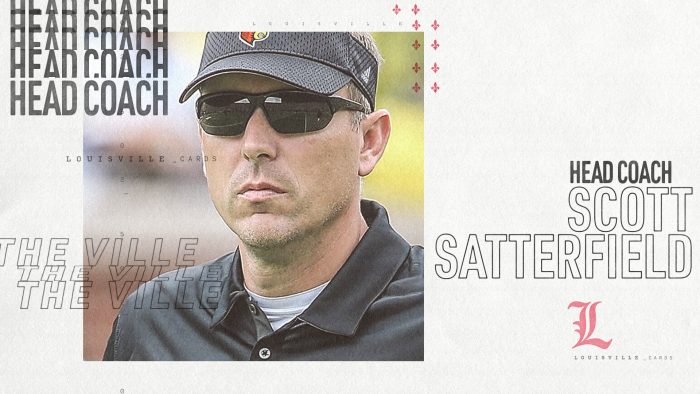 LOUISVILLE, Ky. – Scott Satterfield, who guided his teams to three consecutive Sun Belt Conference championships, has agreed to a six-year contract to become the 23rd football head coach at the University of Louisville, Vice-President/Director of Athletics Vince Tyra announced on Tuesday.

“When I set out looking for a new head coach, I recognized Scott early in the process as someone I was confident in leading this football program,” Tyra said. “Following his career very closely, his teams are statistically very sound on both sides of the football. Both his offenses and defenses are ranked high nationally, and I valued how well-prepared and well-coached his teams have always been at Appalachian State.

“He has a proven record of building great teams and winning championships, but he’s done an outstanding job of building character and establishing a strong culture within his programs. We are excited about his plans for our football program, and I am thrilled to welcome Coach Satterfield and his family to Louisville.”

“My family and I are extremely excited to be able to join this outstanding university and passionate community,” Satterfield said. “I’m so thankful to Vince Tyra and Neeli Bendapudi for giving me the ability to fulfill my dream. Words cannot express how grateful I am. I have two immediate obligations: mold these young men into productive members of society and put a competitive team on the field that’s going to work extremely hard to win games.

“I understand there are high expectations here, but as a program, we will do things the right way and develop men of high integrity and character. We will build a program that our fans will be extremely proud of on and off the field.”

Satterfield compiled a remarkable 51-24 record at Appalachian State, including a 38-10 conference mark in six seasons with the Mountaineers. His conference record of 34-6 in five Sun Belt seasons is the best in the league over that span. Notably, he became the first coach to lead a school from the FCS level to FBS and immediately earn three-consecutive bowl wins.

In the Mountaineers’ short time in the FBS era, Satterfield has directed Appalachian State to three-straight conference titles and led the program to its fourth-straight bowl appearance this year.

In 23 seasons at Appalachian State, including five as a quarterback (1991-95) and 12 as an assistant coach (1998-2008, 2012), the Mountaineers secured three NCAA Division I FCS national titles and 11 conference championships.

This season, the Mountaineers are 10-2 and captured the East Division title behind a 7-1 league record. The team has compiled five straight wins heading into its bowl appearance, outscoring opponents 157-60.

Defensively, the Mountaineers are sixth nationally in total defense, yielding only 279.3 yards per game and sixth allowing 15.7 points per contest. On offense, Satterfield’s team is averaging 36.7 points per game, which is 20th in the country, and is 15th in rushing offense behind 241.0 yards per game on the ground.

In 2016, the Mountaineers completed a 10-win season, winning nine of their last 10 contests to finish at 10-3 overall – capped by a 31-28 win over Toledo in the Camellia Bowl. The Mountaineers’ two losses came at the hands of ranked opponents, opening the season with a 20-13 overtime loss to No. 9 Tennessee and a defeat to No. 25 Miami two weeks later.

In 2015, Satterfield’s third year leading the Mountaineers, the team posted an 11-2 record. It was the highest win total by an FBS program in its first season of bowl eligibility after completing the transition. The Mountaineers ranked among the Sun Belt’s top two in 19 of the league’s 33 statistical categories during the season.

Known as an innovative offensive mind, Satterfield’s team that season scored over 28 points in 11 games. To add to that success, the Mountaineers finished 11th in the nation in total defense, yielding only 314.5 yards per game, and 14th in the country in scoring defense at 19.1 points per game. Appalachian State held seven opponents to 14 points or fewer, including a pair of shutouts.

The Hillsborough, N.C., native won four games in his first season, but steadily improved the program over the next five seasons. In 2014, Satterfield’s squad captured a 7-5 mark, winning its final six games to close out its first season as an FBS member.

Satterfield spent the first 11 seasons of his professional career in Boone, coaching the Mountaineers’ wide receivers (1998), running backs (1999-02) and quarterbacks (2003-08). He was an integral part of Appalachian State’s transition from a Power-I to a Spread offense in 2004.

With Satterfield serving as the Mountaineers’ primary play-caller, Appalachian State ranked among the nation’s top 20 in five major offensive statistical categories (scoring, rushing, passing, passing efficiency and total offense) from 2004-08. In 2007, the season in which Appalachian State took down Michigan, the Mountaineers led the nation with a school-record 488.3 yards of total offense per game.

As Appalachian State’s quarterbacks coach, Satterfield coached both Richie Williams (2003-05) and Armanti Edwards (2006-08) to All-America recognition. He was Edwards’ mentor for the first of his back-to-back Walter Payton Awards (FCS Player of the Year) in 2008.

In his only season at Toledo, the Rockets ranked 20th nationally in passing (278.5 yards per game) and 14th in total offense (438.3 yards per game). With FIU, he helped lead the Golden Panthers to the first two bowl appearances in school history, including a victory over Toledo in the 2010 Little Caesars Bowl.

As a quarterback at Appalachian State, Satterfield made 27 starts from 1992-95 after redshirting as a true freshman walk-on in 1991. He earned first-team all-conference recognition as a senior in 1995 after passing for 1,461 yards and rushing for 649 more to help lead the Mountaineers to the only undefeated, untied regular season (11-0) in school history and a 12-1 final record. He graduated from Appalachian State with a bachelor’s degree in physical education in 1996.

Satterfield and his wife, Beth, a former track and field athlete at Appalachian State, have three children: Bryce, Isaac and Alli.

Notable Accomplishments
• Appalachian State won its third straight Sun Belt title this year. The only other FBS programs with at least three straight conference titles are Oklahoma and Clemson.
• The Mountaineers are 92-17 in their last 109 home games since 2003. App State went 6-0 at home this season to post the first unbeaten home record since a 9-0 mark in 2006.
• By winning the inaugural Sun Belt Championship Game on Dec. 1, Satterfield improved to 44-7 against Group of Five conference opponents and 35-6 against Sun Belt Conference opponents.
• Appalachian State earned a Top 25 ranking this season, becoming just the second Sun Belt team to be ranked in a national poll.
• With 40 wins since the start of the 2015 season, Satterfield is tied for fifth place nationally and first among Group of Five head coaches. The only FBS coaches with more wins in that time are Alabama’s Nick Saban, Clemson’s Dabo Swinney, Ohio State’s Urban Meyer and Wisconsin’s Paul Chryst.