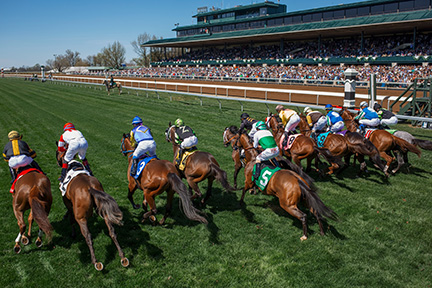 LEXINGTON, Ky. —Keeneland has announced expansions to its 2019 Spring Meet, which will open Thursday, April 4, a day earlier than in previous years, and present two new stakes, both $100,000 turf sprints, to its schedule for a total of 18 stakes worth a season record $4.6 million in purse money. Topping the 16-day meet, to be held April 4-26, are the $1 million Toyota Blue Grass (G2) and $500,000 Central Bank Ashland (G1), both nationally prominent classic preps set for opening Saturday, April 6.

The Thursday opener means the Spring Meet will not lose a day because of Easter Sunday, April 21, when Keeneland is closed. Prior to 1960, the Spring Meet often opened on Thursday when the season was shorter.

With the new stakes, the Spring Meet will present 10 stakes on grass and eight stakes on dirt.

“Keeneland is excited to offer these new features for the 2019 Spring Meet,” Keeneland Vice President of Racing and Sales Bob Elliston said. “The addition of two turf stakes for 3-year-olds will increase opportunities for horsemen competing during the Spring Meet and fill a nice niche in the national landscape of turf racing. We’ve also seen the growing interest of several major connections to use the grass stakes at Keeneland to prepare for summer campaigns, including competing at Royal Ascot.

“The new races will enrich a season anchored by blockbuster stakes racing on the first two Saturdays and one that spotlights leading 3-year-olds with classic aspirations.”

The Toyota Blue Grass will be televised by NBC Sports Group along with the Wood Memorial (G2) from Aqueduct and Santa Anita Derby (G1).

The early nomination deadline for the Toyota Blue Grass and Central Bank Ashland is Feb. 16. Late nominations are due March 20.

For the remainder of the Spring Meet, racing will be held Wednesday through Sunday.

Friday, April 12, features the aforementioned Maker’s 46 Mile, for older horses on the turf, and the new Limestone Turf Sprint.

The 2019 Spring Meet will include the resumption of Keeneland’s April Two-Year-Olds in Training Sale, to be held Tuesday, April 9. Preview Day, during which cataloged horses will have breezes over both the dirt track and turf course, is scheduled for Monday, April 8.