FRANKFORT, Ky. — In an interview with The Bottom Line, Kentucky Gov. Matt Bevin detailed changes expected to the state’s Medicaid program in 2019 and how the state strives to achieve education attainment and workforce quality.

A new report by the Business-Education Roundtable, a group of top officials in each field, was recently released setting an ambitious agenda for education attainment and workforce quality focused on investing in early childhood education and preschool, reinventing high school, ensuring every adult obtains a marketable degree or credential, and engaging employers to define needed skills and develop talent supply chains.

Along the same lines, Gov. Bevin is working on an executive order with similar goals following the efforts of a workgroup put together focused on education and workforce.

Bevin said groups have been working on a multi-pronged approach to address workforce issues starting at the pre-K level preparing students all the way through ensuring they are equipped with the right skills for employment.

The input of the business community is highlighted as a critical part of reforming education and workforce systems as people coming through Kentucky’s schools will eventually need to meet the needs of employers as they enter the workforce.

“At the end of the day, we want to make sure we are getting more people trained and ready for the real world. And the real world is one where you go to work and pay your bills and you’re part of society,” Bevin said (at 2:20 in the video below).

As for how these efforts will be funded, Bevin said there is no lack of workforce dollars already present in the state and how that money is being used should be examined.

“I don’t know of any other state doing a better job than we are right now of maximizing what we do have to get a great return. But it will take time. There’s been a lot of inefficiency, we’ve got to let these seeds germinate. But we are going to start to focus on specific training programs,” Bevin said.

Bevin highlighted the state’s increased investment in workforce in recent years, apprenticeship programs, and other initiatives that have started the process to improve workforce, adding he is excited for what is to come in this area.

Changes to Medicaid in Kentucky

The federal government recently gave approval to Kentucky’s 1115 Medicaid waiver, meaning changes will be coming for those who are receiving Medicaid benefits in the expanded population, consisting of those who make between 100 percent to 138 percent of the federal poverty rate.

The Medicaid waiver, known as Kentucky HEALTH (Helping to Engage and Achieve Long-Term Health), was crafted with the goal of improving the health of its participants, strengthening Medicaid’s long-term fiscal sustainability, and promoting personal responsibility for health and well-being.

Bevin noted those who are in the original Medicaid population will not be impacted by these changes, only those who were added to the Medicaid rolls through an expansion of the program in 2014 when the state opted in to an expansion in conjunction with passage of the federal Affordable Care Act.

As for what people on the expanded population can expect to see and when, the governor said the new program will be implemented April 1 and able-bodied individuals between the ages of 19 and 64 without dependents will be expected to work, volunteer, train for jobs, be in school, or be a caretaker for 20 hours a week in exchange for their Medicaid benefits.

“If they are unwilling to do that, why should they get something for free that the people who are paying for it may or may not even have themselves? Ludicrous to think that somebody goes to work every day and pays taxes to give something free to someone who is unwilling but able to go to work,” Bevin said.

Bevin said the goal is to get people more engaged in their health coverage and see better health outcomes for Kentuckians as the state ranks highest among other states in many different poor health issues.

Watch the final interview segment with Gov. Bevin on Medicaid, workforce, and his term as governor below: 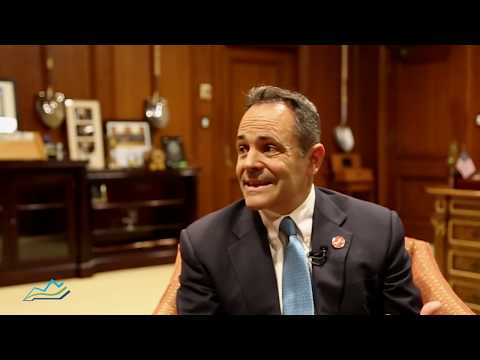 Watch part one of the interview with Bevin on his reelection campaign and the issues of pensions and taxes here.

Part two of the interview where Gov. Bevin discusses the need for infrastructure investment in Kentucky can be found here.