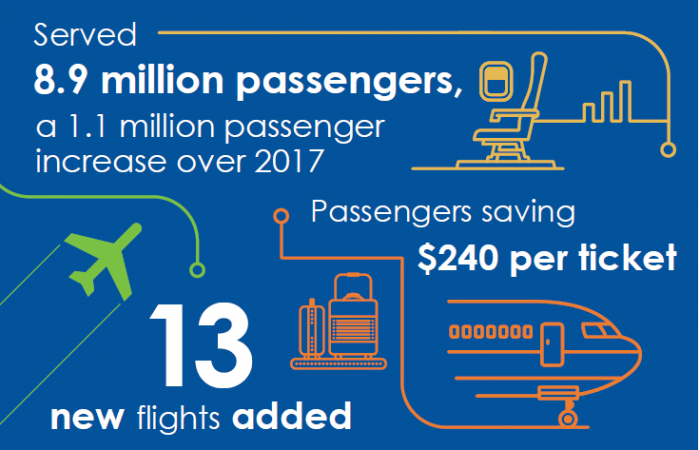 ERLANGER, Ky. — In 2018, the Cincinnati/Northern Kentucky International Airport (CVG) continued to be one of the fastest-growing airports in the U.S. The airport served 8.9 million passengers, its largest volume since 2010, representing more than 1.1 million more passengers compared to 2017.

For the first time in its history, CVG experienced annual cargo tonnage of more than 1.2 million tons (2.4 billion pounds), an increase of 19.6 percent over 2017.

Airfares at CVG were at an all-time low throughout 2018. Passengers are paying on average $240 less per ticket than four years ago.

And, the airport continues a major capital improvement program, investing $345 million over the next few years to make travel through CVG an unforgettably positive experience. Roadway construction began in 2018 to create a new entrance road and to make way for the construction of a consolidated rental car facility.

“The positive growth we’re experiencing at CVG is because the community continues to embrace what’s next with additional air-service options and the lowest airfares in the region,” said Candace McGraw, chief executive officer, CVG. “We’ve been successful in adding new nonstop destinations, as well as working with air cargo partners to establish and grow their operations, all of which grow the airport community and positively impact the local economy.”

“We’re in year four of our 5-year strategic plan, and continue to see record-breaking results,” said J. Michael Schlotman, CVG board chairman. “I congratulate the entire CVG team on the tremendous successes in 2018. Our mission statement says, ‘we want CVG to be the airport of choice to work for, fly from, and to do business with,’ and these results clearly indicate we are delivering.”

·         Delta expanded service to its most popular destinations from CVG and launched new service to Austin and Phoenix.

·         WOW Air began service to Iceland and Europe, and while the service didn’t last, the response from the community demonstrated this market will respond well to more international service offerings.

·         Largest origin airport on the Vacation Express network with six destinations served in 2018.