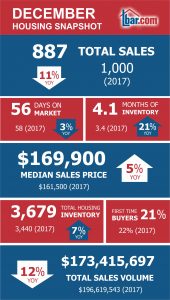 LEXINGTON, Ky. — Consumers in the Bluegrass region entered 2019 with more homes on the market, according to the Lexington-Bluegrass Association of Realtors (LBAR). December numbers showed that total housing inventory was up 7 percent versus the same month the prior year, jumping from 3,440 to 3,679 active properties, marking the fourth consecutive month of year-over-year increases. This, coupled with slower sales for the month, led to the months of inventory to spike 21 percent over last December, ending 2018 at 4.1 months of available properties compared to 3.4 months in 2017.

“The weather certainly played a large role in the housing market at the end of year,” said Al Blevins, 2019 president of LBAR. “Weather reports indicate that 2018 was the wettest year on record for Lexington and December was certainly one for the books as well.”

“2018 turned out to be a solid year for real estate overall. The trend seems to be fewer homes selling in Fayette County, which represents just over a third of all home sales in LBAR’s market area,” said Blevins. “Counties adjacent to Fayette are representing a larger percentage of real estate transactions as people are moving into these areas due to growth and development opportunities. Some of the counties to the east and south of Fayette are also seeing an uptick in sales.”

Even with slower sales, the time a home took to sell continued to slip as it hit 56 days in December, a 3 percent decline versus the same time last year. For the year, days on market (DOM) dropped 4 percent to end 2018 at 52 days. Data also showed the number of homes that stayed on the market under a month dropped to 50 percent, the lowest it’s been since January 2018 when that number was 46 percent. It jumped to a high of 69 percent in both June and July. 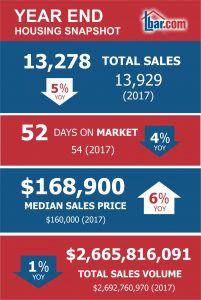 “This year, home price increases should slow a bit and if inventory levels continue to increase, even slightly, consumers should have an easier time entering the market and finding what they are looking for,” according to Blevins. “The Fed has indicated less rate hikes for 2019 and we entered the new year with lower mortgage rates than expected so that should benefit consumers now and well into the spring buying season if they stay at current levels.”