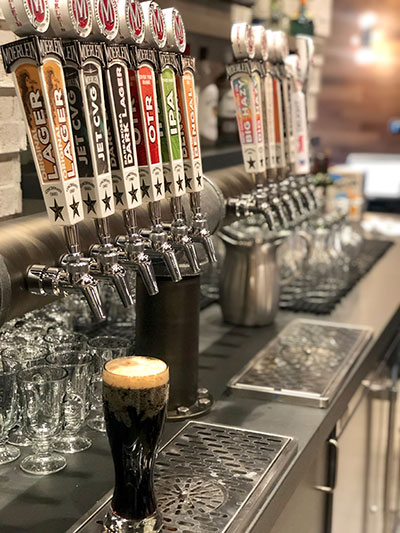 The more than 1,600-s.f. full-service restaurant and bar is operated by global restaurateur HMSHost in Concourse A by gate A15.

In celebration, a collaborative travel-inspired brew, JET CVG, was tapped and is now being served at three Christian Moerlein locations:

JET CVG was made to marry the love of beer and travel, and inspire locals to jet off to their next adventure. It is a German-style Schwarzbier, “jet” black in color with a light mouth feel and clean lager taste. It pays tribute to Cincinnati’s German brewing legacy featuring Old World Pilsner, Munich, Caramunich II, Carafa III, and Chocolate malts as well as German Hersbrucker hops. Aroma and flavor are a combination of roasted malts, slight coffee, and hints of tobacco.

To accompany the award-winning brews, travelers can enjoy all-day dining with popular food items reminiscent of Over-the-Rhine where the brewery taproom is located. Menu items include meat and cheese boards, salads, burgers and beertastic entrée options. While early morning travelers are greeted with a selection of breakfast favorites to kick of their day.

“We’re excited to incorporate local flavor into CVG, and to be one of the first airports to collaborate with a local brewery to produce a travel-inspired beer,” said Candace McGraw, CEO, CVG. “Both the food and drink pay homage to our community for locals and visitors to enjoy.”

“We’re thrilled to bring the iconic Christian Moerlein Brewery Company to CVG. Nearly two centuries after first opening, their award-winning beer along with its perfectly matched cuisine continues to be sought-after around the region and now we’re delighted to share this locally grown brewery with the millions of local and visiting travelers at CVG,” said HMSHost Vice President of Business Development Bryan Loden. “HMSHost, along with our partner Sheldon Poole of J.Q. Enterprises, are thankful to the Cincinnati/Northern Kentucky International Airport for their partnership to continue elevating the dining experience for travelers.”