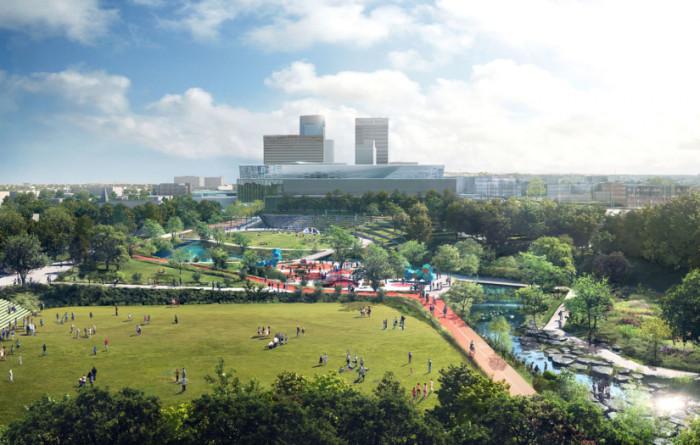 “We are excited to announce that Jim Gray and Jim Host have joined the board,” said Allison Lankford, executive director of Town Branch Fund. “Their innovation, passion and dedication to the community as well as their leadership and entrepreneurial skills will be invaluable as we continue to make great strides with fund-raising and planning for the park.”

Gray, currently the chairman of the board of Gray Construction, made the park one of his three core themes of creating jobs, running government efficiently and building a great American city when he was mayor.

“Great cities have great parks, and Town Branch will be a destination park with gravitational pull,” Gray said. “Work on Town Branch Commons, a linear park system with biking and pedestrian trails, is already under way. The commons will wind through downtown, following the path of Lexington’s original water source, Town Branch, to link our urban core to our iconic countryside. The park will be the main gathering space. I look forward to working to make this vision a reality through this public-private partnership.”

Lexington received numerous recognitions while Gray was in office, including fourth best run city in the country and most effective pension reform in the country.

Gray received a bachelor of arts degree from Vanderbilt University, then came home to help grow his family’s construction firm, accepting a Loeb Fellow appointment at Harvard along the way. Today, Gray Construction is the country’s largest builder of major manufacturing facilities with revenues exceeding $1 billion and projects completed for companies like BMW, Toyota, Hitachi and Siemens.

Host founded Host Communications, a pioneering collegiate sports marketing and production services company. He also has served as chairman of the Louisville Arena Authority, executive director of the Lexington Convention Center, Kentucky Commerce Secretary and has been involved in numerous philanthropic and community projects.

“This will be a signature park that will transform downtown,” Host said. “Lexingtonians and visitors alike will benefit from the park, which will provide tremendous economic, environmental and health benefits.”