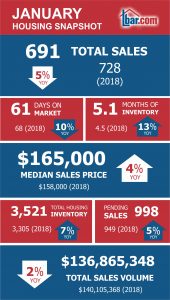 LEXINGTON, Ky. — The new year brought with it several indicators that 2019 may be a turnaround period for housing supply in the central Kentucky region. The months of inventory in January jumped over 24 percent from December 2018 and 13 percent year-over-year, reaching 5.1 months in January 2019. In addition, January had 106 more new listings this year than last year, a 9 percent increase, and 456 more new listings than in December, a 56 percent increase. Nationally, housing inventory is still much lower than in central Kentucky, landing at 3.9 months in January. However, that is up from 3.4 months of supply in January 2018.

Total housing inventory has risen year-over-year for five consecutive months, after being lower in each of the previous eight months, increasing 7 percent in January 2019 with 3,521 active listings versus 3,305 in January 2018.

“The spring season will be here before we know it and all the signs are pointing to an active market, especially for buyers,” said Al Blevins, 2019 president of LBAR. “The region is seeing an increase in properties hitting the market earlier than usual, which will give buyers a greater selection and the opportunity to view more homes than in recent months.”

“Price increases may slow gradually in 2019 due to the addition of available properties,” Blevins said. “As buyers continue to enter the market, if inventory continues to rise, sales may also start to pick up. We already saw indications of that in January as pending sales jumped during the first month even though closed sales were down. Some of that could be delayed closings due to the government shutdown but we’ll see as we move through the first quarter.”

Lawrence Yun, chief economist for the National Association of Realtors, said that sales in January were weak compared to historical norms but have reached a cyclical low. Yun echoed what Blevins stated that more buyers will likely jump in the market in coming months.

“Lower than expected interest rates, a strong economy and increasing inventory will work in favor of home buyers looking in the near future,” says Blevins. “Pent-up demand in the region will likely push more people into the market to take advantage of the opportunities presented by the current real estate climate.”

The time a home took to sell increased from December to January by 9 percent, from 56 days in December 2018 to 61 days in January. Year-over-year, however, homes stayed on the market 7 less days, a drop of 10 percent from 68 days in January 2018.