Home » CVG offers more and cheaper flights, short commutes and easy access to most of America 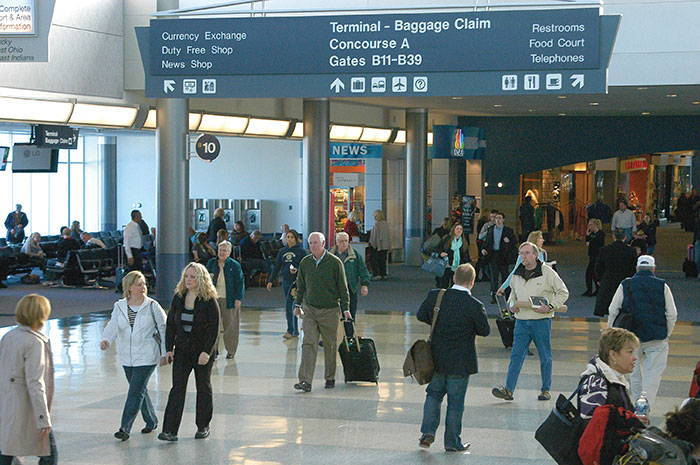 There’s plenty to cheer about at one of the most critically important economic drivers in Northern Kentucky and Greater Cincinnati. Even before recent major announcements, CVG’s direct and indirect impact was at least $4.4 billion, according to researchers at Northern Kentucky University and the University of Cincinnati who released the most recent economic impact study on the airport in early 2017 based on 2015 data.

Passenger and cargo growth numbers are about four times the national averages in both categories.

Lower airfares are driving passenger traffic, and the DHL package freight hub and the explosive growth of Amazon at the airport plumped up cargo figures.

The most recent quarterly report from the U.S. Department of Transportation also contained good news for passengers at an airport that formerly had some of the highest airfares in the country. The report for the second quarter of 2018 pinpointed average fares at $314, a decrease of 43 percent – $240 per ticket – from four years ago, McGraw said.

That average fare is lower than those in Louisville, Lexington, Indianapolis, Columbus and Dayton, according to CVG and the transportation department.

And those lower fares did not go unnoticed in Greater Cincinnati. During the three-month period through July 2018, CVG set a record with 1.2 million passenger trips originating at the airport – topping the prior record of 1 million for the same period in 2000.

Growth has translated into more jobs at the airport for people who either work there or for companies located near CVG. The airport itself has about 470 employees, a number that is stable, but the number of “badged” employees working inside the secured perimeter is about 14,300, an increase of 800 compared to the previous year, CVG spokeswoman Mindy Kershner said.

“We have completed development deals over the last two years that we anticipate to bring 1,700 new jobs; this is in addition to all of the development that has already been approved by our board,” McGraw said.

McGraw put a positive spin on CVG’s brief 2018 relationship with WOW, the Iceland-based low-cost carrier that ended service to Cincinnati, Cleveland and St. Louis late in the year.

“It was wildly successful here. All of those flights had about a 90 percent load factor, and I think they (WOW) grew bigger and faster than they anticipated and they’re retrenching a bit and looking at their business model,” McGraw said. “I think it shows that we have room and capacity for additional international service from CVG.”

While traffic is up, up, up at the airport, officials continue to work on getting the right solution for improving the I-71/75 Ohio River crossing at the Brent Spence Bridge. The busy north-south bridge handles its designed capacity and then some, but initial estimates to expand this key linkage between the Cincinnati and Covington downtowns clock in at around $2.6 billion.

The overriding question remains how to pay for the project, Kentucky Gov. Matt Bevin said in an October 2018 visit. Until then, eight other bridges continue to provide crossings for vehicles, pedestrians and rail.

One important recent road project is the 1.4-mile rebuild of KY 9 through Newport between the Taylor Southgate Bridge and 12th Street – the new road ties smoothly into an existing four-lane road providing quick access to I-275 and a portion of KY 9 known as the AA (Alexandria-Ashland) Highway.

First proposed decades ago, the $51 million project opened to traffic in mid-October. Besides providing easier access to downtown Cincinnati over the Taylor-Southgate Bridge, the new configuration puts motorists minutes away from downtown Newport, its burgeoning riverfront and the Fourth Street bridge that leads to downtown Covington.

“It will be exciting to see how this new corridor will open new opportunities for the city and for the Northern Kentucky region,” said Nancy Wood, a spokeswoman for District 6 of the Kentucky Transportation Cabinet.

More ways to get around

Transit Authority of Northern Kentucky (TANK) had about 3.4 million bus rider trips for 2017, and revenues of $22.8 million, according to spokeswoman Gina Douthat. TANK serves 35 cities in Boone, Campbell and Kenton counties, with 11,000 people riding its buses daily, including the popular Southbank Shuttle.

In late 2018, the bus system announced a new partnership with Adsposure to advertise on its high-visibility vehicles and shelters. TANK will keep 52 percent of the revenue, with Adsposure guaranteeing at least $2.2 million over the seven-year contract.

The TANK system will soon add hybrid-electric buses via a $41 million federal grant announced in October 2018 for the Greater Cincinnati region.

Bus system officials are examining how people want to use a combination of transit and “shared ride” services to help workers who need transportation to and from their jobs, Douthat said.

For the more adventurous, there were other ways to cruise the region. A Cincinnati-based Red Bike rental operation launched in the fall of 2014. It has 12 Northern Kentucky stations in Covington, Newport and Bellevue. At least two electric scooter companies – Bird and Lime – are competing for shares of the market in which riders navigate the region on devices that go about 15 miles per hour.

And should you happen to be looking for an opportunity to exercise while enjoying a beer, try the Pedal Wagon, which looks like a bar on wheels. Parties of as many as 15 people can provide pedal power for two-hour bar/restaurant hopping routes around downtown streets. It recently expanded into Covington.

CVG is embracing what’s next as an essential part of the region’s overall growth and success, serving more nonstop destinations than any airport in the Tri-State. CVG is one of the fastest-growing airports in the U.S. in both passenger and cargo traffic, and is one of three global super-hubs for DHL and future home to Amazon Air Hub.

• Northern Kentucky is the No. 1 region for the U.S. population servable within a one-day drive, according to Tri-ED officials – 50% of the population in 1 day, and 90% within 2 days.

• Located on the north-south I-75 corridor connecting Michigan to Florida.

• Average commute times in Greater Cincinnati are only 22 minutes.

At Your Service Taxi