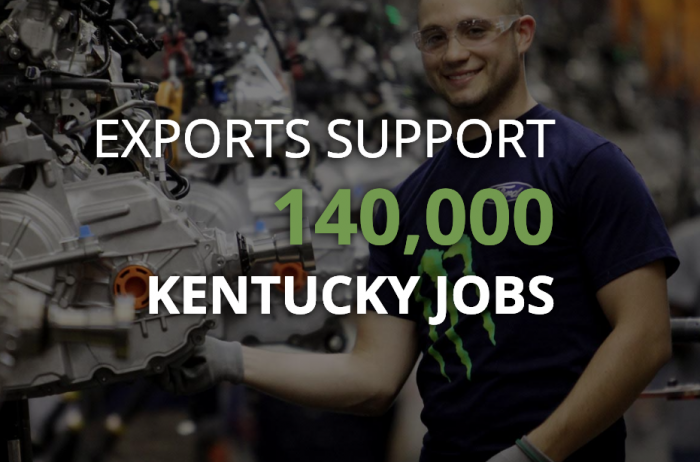 FRANKFORT, Ky. — Kentucky exports reached an all-time high for a fourth consecutive year with $31.76 billion in goods and services shipped abroad from the commonwealth in 2018, a 2.9-percent increase from the previous year, Gov. Matt Bevin announced Thursday.

“Once again, Kentucky’s record-setting exports highlight the momentous economic progress we have achieved in recent years,” Bevin said. “Our rapidly expanding trade is the result of steps we have taken to create a robust business climate and to market Kentucky excellence to a global audience. The quality of Kentucky-made products is unmatched, and more and more people around the world discover this fact every year. We have cultivated some outstanding international relationships over the past three years, and we will continue these efforts as we build upon our commonwealth’s strong and dynamic reputation.”

Consistent with the past several years, aerospace products and parts took top-category honors in 2018, according to data recently released by the U.S. Census Foreign Trade Bureau and WISERTrade. The industry shipped nearly $12.5 billion in products to other countries last year, a 7.1-percent increase over 2017. Aerospace-related exports skyrocketed more than 60 percent since 2014, when the industry sent about $7.8 billion in products and parts across borders.

Canada retained its spot as Kentucky’s top export destination, importing more than $7.7 billion in goods and services. France (more than $3.3 billion) jumped to second on the list, with Kentucky increasing exports to the country by nearly 13 percent as compared to 2017.

The United Kingdom (nearly $3 billion), Brazil (nearly $2.5 billion) and Mexico (about $2.3 billion) make up the rest of Kentucky’s top five 2018 export destinations. China, after making a drastic leap in 2017 to become Kentucky’s No. 4 trade partner – its first year ever as a top-five export destination for the state – imported the sixth most Kentucky products by dollar value (nearly $2.2 billion) in 2018.

Kentucky’s exports again held up well nationally, placing 17th among all states and Washington D.C., despite having just the 26th largest population in the U.S.

Since taking office in 2015, Gov. Bevin and the Cabinet for Economic Development have strongly emphasized the importance of strengthening Kentucky’s international ties. Since February 2018 alone, Kentucky delegations went on trade missions and business trips to Germany, Austria, Hungary, Japan, South Korea, China, the United Kingdom and, most recently, a US delegation trade mission to India led by Gov. Bevin.

“One of our primary objectives has been to ensure no other state outhustles Kentucky. That approach has paid dividends, as we have seen yearly growth in international trade and increased interest from foreign countries wanting to invest in Kentucky,” said Vivek Sarin, executive officer & co-CEO of the Cabinet. “We fully intend to move forward with this strategy to expand Kentucky’s reach even further, build new business relationships abroad and create new opportunities for Kentuckians.”

Kentucky now has more than 500 internationally owned facilities, which represent 34 countries and employ nearly 112,000 people in total. Terry Gill, secretary of the Cabinet, said Kentucky has made great strides but will not stop with these accomplishments.

“We have invested a great amount of time and effort on international growth, and these record exports and increased foreign direct investment demonstrate that those efforts, along with the state’s outstanding logistics capabilities, have resulted in great progress,” Gill said. “While we are proud of these strides Kentucky has made, we have only just begun to realize the potential that is out there. We will continue to show the world Kentucky is a premier location for businesses while promoting the commonwealth’s excellent goods and services.”

Kentucky businesses can learn more about export opportunities and make connections with export markets through the Kentucky Export Initiative. KEI brings together a coalition of business organizations, trade experts and government entities, including the Cabinet for Economic Development, with a focus on increasing Kentucky exports to create new jobs and diversified markets for the state’s products. Learn more about KEI at www.KYExports.com.