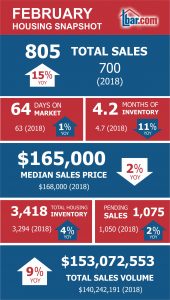 LEXINGTON, Ky. — Housing sales in the Bluegrass region picked up in February, jumping 15 percent over the same month in 2018. The 805 sales recorded by the Lexington-Bluegrass Association of REALTORS (LBAR) in February marked the highest number ever for the month, beating last year’s home sales of 700.

Townhouse/condo sales dropped 19 percent year-over-year, from 59 to 48 units sold, however, single family home sales rose from 641 to 757, an increase of 18 percent for the month. February sales increased over 16 percent from the previous month. Year to date, home sales are up 5 percent over 2018, increasing by 68 transactions to hit 1,515 total sold.

“The market is hot going into the spring, which most in the industry predicted,” said Al Blevins, 2019 president of LBAR. “The government shutdown and the months of cold, wet weather certainly pushed more closings into February, however, it turned out to be a record-breaking month for the Association. The data we see for the upcoming months also looks positive as pending sales are showing an increase as well.”

Pending sales in February were up 2 percent, following a January increase of 5 percent. Total pending sales ended February at 1,075, up from 1,050 in 2018.

The boost in home sales pushed the months of inventory lower in February to 4.2 months, a decline of 11 percent over 2018 when it was 4.7 months. This is also a 17 percent decline from January.

However, the overall housing inventory available has increased for six consecutive months and jumped again in February by 4 percent, to a total of 3,418 homes available on the market, an increase from 3,294 in February 2018. New listings on the market also increased in February, jumping 4 percent year-over-year and follows a 9 percent increase that was recorded in January.

“Continued inventory increases coupled with a bump in new listings is a good sign for real estate in the Bluegrass region,” said Blevins. “Buyers have been limited in selection for some time now and this new trend opens up choices for those looking to purchase as well as bringing discouraged buyers back into the market.”

Another positive result of the housing stock increase is that price increases have slowed, at least for now. February saw a 2 percent drop in the median price, from $168,000 in 2018 to $165,000 this year. Single family homes remained relatively steady, however, the townhouse/condo median price fell 6 percent, from $160,000 to $150,000 year-over-year. Nationally, the median home price continued to rise for the 83th straight month, ending just north of $247,000 in January. The central Kentucky region continues to be much more affordable than what is seen in many parts of the country.

Days on market also reversed course in February, rising 1 percent to 64 days, up from 63 days a year ago and an increase from 61 days in January. Several factors may have contributed to the increase including delayed closings as well as buyers taking more time to choose a home since inventory levels have been steadily rising.

“Buyers will enjoy a more favorable market for the next several months as more and more listings should become available,” said Blevins. “The spring months, typically the second quarter, which starts in April, is when most people list their homes for sale. With interest rates still at historically low levels, the real estate market will continue to be extremely strong throughout the central Kentucky area.”

LBAR data shows consumers are in the market and looking to buy as property showings were up almost 8 percent in February and scheduled appointments for viewing properties saw a 7 percent increase for the month, marking 13 consecutive months of increases.