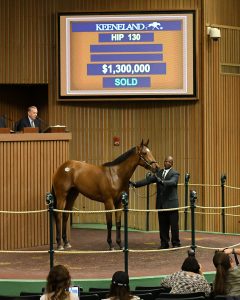 LEXINGTON, Ky. — A 2-year-old daughter of Tapit and Grade 1 winner My Conquestadory who is a full sister to 2019 Xpressbet Fountain of Youth (G2) runner-up Bourbon War sold to Chad Schumer, agent, for $1.3 million to top Keeneland’s April Two-Year-Olds in Training and Horses of Racing Age Sale.

The April Sale returned Tuesday after a five-year hiatus and featured for the first time an offering of horses of racing age.

“Trade was very good,” Keeneland Director of Sales Operations Geoffrey Russell said. “The racehorses were well received. Strong trade continued into the 2-year-old portion of the sale. The (sale-topping) Tapit filly was on everybody’s list, with a good update from Bourbon War and a great work she turned in yesterday during the Preview Show. Her sale showed the money is here for those kind of horses.

“We’re in a rebuilding process for this sale,” Russell continued. “Some people were willing to rebuild with us, and some people wanted to wait and see. We hope they saw and will participate next year.”

During Monday’s Preview Show, which featured cataloged juveniles working over the dirt track and turf course, the sale-topping Tapit filly breezed an eighth of a mile in the co-fastest time of :10 over the main track.

“She is a tremendous physical, she had a superb breeze and her gallop out was really strong,” said Schumer, who bought the filly for Prince Sultan Bin Mishal Al Saud of Saudi Arabia. “She is by one of the leading sires of all time and she has a massive pedigree. (The price) is not an unexpected number. (For) a Tapit with that kind of pedigree, you have to expect to pay that kind of money. She was an obvious choice.

“Once you get above a certain number it is kind of numbing. I have never gone that high before, so it has not sunk in yet. Hopefully, she will be a Grade 1 horse.”

With the purchase, Schumer was the day’s leading buyer.

“We shipped in about 10 days ago,” consignor Dean De Renzo said. “The weather is a little cooler than Florida, and (horses) thrive when they come here. She is a May foal, and we have taken our time with her. We wanted to target a sale that is a little later in the year. We hope that Keeneland continues having this sale because we love the timing and we love to sell here.

“(Because the sale is during the race meet), everybody is here – owners, trainers, bloodstock agents and farm owners who see a filly like that and think she will have a lot of broodmare value later after she races. That is a reason we brought fillies here: to attract breeders who are in this area.”

At $500,000, the top-priced horse of racing age is this year’s Twinspires.com Fair Grounds Oaks (G2) third-place finisher, Sweet Diane. Ina Bond’s River Bend Farm acquired the 3-year-old daughter of Will Take Charge, who has been in the money in each of her five career starts.

ELiTE, agent, consigned Sweet Diane, who is from the family of Glinda the Good, dam of champion Good Magic, and Grade 1 winner Magical Maiden. She was a late supplement to the sale.

“This is a new direction for us,” River Bend Farm Manager Larry Weeden said. “We have been selling yearlings here for almost 30 years. We have a broodmare band of about 12 and try to focus on quality rather than quantity. Eddie Kenneally trains for us, so he is going to train (her). We have high hopes that this will turn into something fun.”

Sweet Diane has 22 points on the Road to the Kentucky Oaks (G1) to rank 16th on the list of leading point earners. The top 14 point earners will earn a spot in the starting gate for the $1.25 million Oaks at Churchill Downs on May 3.

ELiTE was the leading consigner, selling eight horses for $1.31 million.

The next auction is the 76th annual September Yearling Sale, to be held Sept. 9-21.