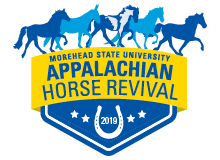 The event will bring together equine enthusiasts from across the nation to show horses that are native to Kentucky and Appalachia, including Kentucky Mountain Saddle, Paso Fino, Smokey Valley, Tennessee Walking, Rocky Mountain and Spotted Saddle horses, among others.

Admission to the event is $5 each day.

“We’ve had horse shows at Morehead State University since 1966, but we’ve never had anything quite like this before,” said MSU Farm Manager Joe Fraley. “We wanted to host an event to draw some interest back to the horse industry in Eastern Kentucky. Horse shows used to be a popular family event and we want people who don’t normally go to a horse show on a Saturday night to come out and spend the day with us to see what these breeds are all about.”

The show is unique in that the top winners from the different breed classes will compete against each other for Best of Show awards.

“We wanted to end the show with a bang,” Fraley said. “No show has really thrown out the idea of competing against different breeds.” He said the idea has been well received and so far, competitors from as far away as Missouri and Florida have expressed interest in the event.

Fraley said he was approached by Smokey Valley Farms in Olive Hill about the event. Max Hammond, who works at the farm, said he thinks MSU is the ideal location for an event highlighting Appalachian horse breeds.

“Generations of knowledgeable horsemen have come to Eastern Kentucky for gaited horses,” he said. “Morehead is pretty much the cultural and geographical epicenter of Appalachian horses. Many of the gaited breeds were developed within an hour’s drive of Morehead, so MSU is a very fitting place to have an event to revitalize the Appalachian horse industry.”

Hammond added he believes the show could become a signature event for MSU.

The show has affiliations with:

Cash prizes will be awarded to winners in first, second, third and fourth place in breed class, breed championship class, best in show class and king of the mountain class.

The event will also feature a concert by The Wooks at 2 p.m. Saturday, with the horse show beginning at 4 p.m. In addition, there will be a vendor fair throughout the three-day event. The MSU Equestrian Team will sell concessions at the event to raise funds for the team. Team President Taylor Wheaton, a senior from Greenfield, Ohio, said students will be running the horse show and are looking forward to being involved.

“We’re all really excited about it,” she said. “I’ve been here four years, and this is by far the biggest show we’ve ever put on.”