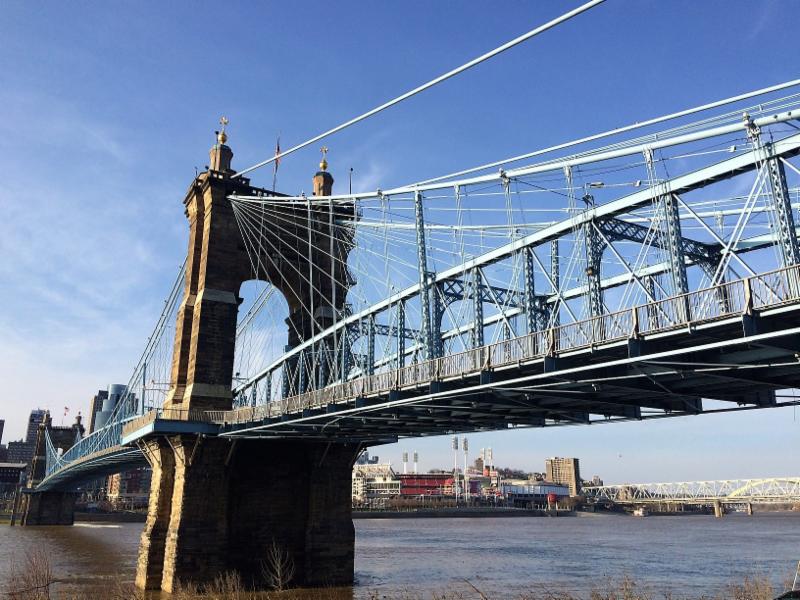 COVINGTON, Ky. — The historic John A. Roebling Suspension Bridge will be closed to vehicles beginning at 4 p.m. today after sandstone fragments broke from the east side of the bridge’s north tower yesterday, state officials said.

In an email sent to the city earlier this afternoon, the Kentucky Transportation Cabinet announced that it was closing the bridge until further notice as a precaution.

“Closing the Roebling Bridge is necessary to ensure the safety of vehicles and pedestrians from the potential of additional falling debris at a height of nearly 80 feet,” said Bob Yeager, chief district engineer for the Department of Highways District 6 office. “We appreciate the understanding of the public as we work to develop a plan to repair and reopen this important, historic bridge.”

KYTC officials said they will evaluate the structure to determine repair options to allow the safe reopening of the 152-year-old bridge to traffic as soon as possible. Performing emergency repairs to the historic bridge is a more extensive process than traditional bridge repairs due to preservation requirements, they said.

City officials said they hoped traffic could be restored quickly and the bridge fixed with minimal problems.

“Not only is this bridge part of our community’s identity, it serves as a major transportation route for many of our residents,” City Manager David Johnston said. “Yet, for everyone’s safety I appreciate KYTC’s effort to address this issue quickly and directly.”

A restoration project addressing routine maintenance, including repairs to the sandstone towers, is currently in the design phase with construction estimated to start in the spring of 2020.

State officials urged pedestrians and motorists to respect the barriers placed on the east side sidewalk and roadway restricting travel for their safety.

Coincidentally, the bridge was closed for a little more than a month at this time last year for emergency repairs after a car hit a primary vertical column, cracking and distorting it. Businesses near the river in Covington said they felt the impact of the closure.

Regular drivers of the Suspension Bridge may instead use the Clay Wade Bailey Bridge (U.S. 25) across the Ohio River or take the 4th Street/Veterans Bridge (Ky. 8) into Newport and cross the Taylor Southgate Bridge (U.S. 27) into Cincinnati.

JCL presents Yarmuth with the Blanche B. Ottenheimer Award
CVG has lowest airfares in the region