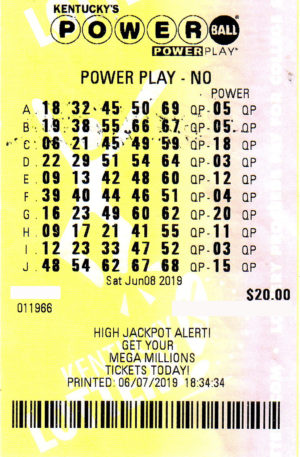 LOUISVILLE, Ky. — The $1 million Powerball ticket from Saturday night’s drawing has been the claimed. The winning ticket matched the five white ball numbers but not the Powerball to win the game’s second prize (Line E. on ticket attached). The winning numbers were: 09-13-42-48-60 and Powerball 18.

A couple from Louisville, who wished to remain anonymous, presented the ticket at lottery headquarters first thing this morning.

“It’s overwhelming but such a huge stress relief,” they told lottery officials.

The couple had stopped at Circle K No. 3303 on Valley Station Road in Louisville Friday evening to purchase their tickets for Saturday night’s drawing.

“We wouldn’t be sitting her if she hadn’t gone in to buy the tickets,” the Louisville man said.

After going to a store to check their tickets, he was told after the clerk scanned the ticket that it was over $600 and too much for them to pay.

“I was sitting in the garage, when I pulled up the Kentucky Lottery app and began putting in my numbers. Next thing I knew, it read we’d won one-million dollars. I just sat in my car crying,” he told lottery officials.

“I went inside and walked up to hug her (girlfriend) and said, ‘We won the million dollars.’ We cried for hours,” they said.

“This couldn’t have happened at a better time and is a huge blessing,” she said.

“It still hasn’t sunk in. I’m thinking, ‘Wow, here in the next couple of hours, our lives will change,’” she said.

After taxes, the couple walked out of lottery headquarters with a check for $710,002.84. Their ticket also matched the Powerball number on a different line, winning $4.

The couple said they plan to pay off debt and may plan a vacation with the winnings.