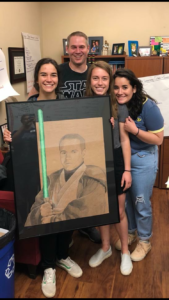 “James led the transformation of Bryan Station High School from a school that had been on the state’s watch list to a national model for connecting rigorous classroom learning with real world experiences,” Caulk said. “Having that leadership capacity at the district level will be invaluable as we continue to drive innovation in Fayette County.”

“In his new role, James will continue to support Bryan Station, while helping drive innovation across the system to achieve greater equity,” Caulk said.

During McMillin’s tenure, Bryan Station High School adopted standards based grading and became the first high school in Fayette County to adopt the academy model, which divides the school into smaller learning communities centered on a career focus. Students in The Academies of Lexington complete career pathways according to their personal interests, while also taking Advanced Placement and dual credit classes.

In partnership with Commerce Lexington, Fayette County Public Schools has been designated a Ford Next Generation Learning Community where students, staff, families and community partners work together to make learning relevant and share ownership for student success.

The strength of those structures ensures the work at Bryan Station will continue, Caulk said.

“James brought stability to Bryan Station and helped change the culture and climate of the building by placing a priority on student learning, family engagement, and open communication,” he said. “Those changes have taken root and become part of the fabric of the school.”

McMillin has 15 years of experience in education and started his career as a biology teacher at Henry Clay High School. He served as an Associate Principal at both Woodford County Middle School and Tates Creek Middle School prior to accepting the principal post at Bryan Station High School.

The School-Based Decision Making Council at Bryan Station High School will set a timeline for hiring a principal.