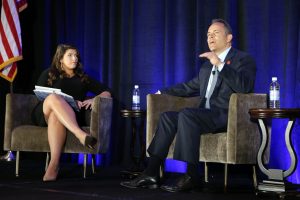 Attorney General Andy Beshear, who is running as the Democratic nominee for governor, declined to appear at the chamber event, saying, according to the Louisville Courier Journal, “As an organization, the chamber has been a major supporter of Matt Bevin and his harmful agenda for working families.”

At the start of the discussion, Governor Bevin was given an opportunity to comment on his opponent’s decision not to attend the annual summit.

“You get to choose one of the two of us,” Bevin said. “You have to decide how do you respond to the fact that someone is not willing to sit and speak with you.”

He further went on to explain the only solution to Kentucky’s financial problems comes from job creators who should want to hear directly from anyone who hopes to lead the commonwealth.

Moving on to policy, the governor spoke about the top challenge facing Kentucky’s fiscal health: unfunded pension liability. Bevin explained his veto of the pension bill passed in the 2019 legislative session impacting some public universities and quasi-governmental organizations such as health departments. He stated some provisions of the bill were illegal and told summit attendees, “I’ll never sign a bill I believe to be immoral or illegal.”

He said he would call a special session to pass the same bill without the provisions he deemed illegal and incorrect effective dates originally included in the bill. Contribution rates have gone up for those entities impacted by the veto, but he explained there is still time to call a special session and pass a new bill to provide relief.

Bevin also noted the bill does not fix the overall pension crisis and further explained the severity of the pension crisis. “Never in the history of the world has a plan as poorly funded as ours succeeded. It would be unprecedented if we managed to save these pensions systems.”  But the governor stated he is committed to taking on pension reform despite it being a “political loser.”

Regarding his campaign for governor, Bevin plans to run on the job he has done. He told the crowd he plans to focus on addressing the pension crisis and additional tax code modernization.

Bevin elaborated on his position on tax reform explaining the state corporate and income taxes should be zero. “Why are we taxing production when we want more production,” he questioned. He further explained that relying more on consumption-based taxes will allow more dollars to flow through the economy and best address the financial ills of Kentucky.

The governor pointed to new policies that have supported a nearly $200 million revenue surplus at the close of the fiscal year. The budget adopted by the legislature stipulates that the money will fund necessary government expenses, the Kentucky Teachers Retirement System health insurance fund, and the Kentucky Retirement System. The governor noted he would like more latitude to spend that surplus.

Bevin announced Kentucky has just reached $20 billion in private capital invested in Kentucky, and the governor said he believes people are investing private capital in Kentucky because they see there is an administration taking financial problems seriously and that there are good things to come from Kentucky.

The governor questioned the polling on his approval rating and said he didn’t care about being popular as indicated by his priorities that are “political losers”—pension reform, tax reform, right to work. “I’ve always been unpopular and yet somehow I’m your governor,” he stated.

Regarding tackling increased infrastructure funding, the governor said it needs to get done in 2020. He acknowledged that no one likes taxes being raised, but explained Kentucky must invest boldly in infrastructure. He explained regardless of the amount of the gas tax increase, the same people will be mad. “If we want things, and we need things, we are going to have to pay.” He said that we cannot just think about what will get us by in the short term with funding; we need a long-term plan.

Governor Bevin discussed the Medicaid waiver and the impact of subsidized health care for able-bodied, working-age people. “Every dollar we provide for people who chose not to work is a dollar we don’t have available for someone to which it was intended,” he said. The waiver, which requires able-bodied, working-age people on Medicaid to work, volunteer, train, or be engaged in some way in their community. The waiver is still hung up in federal courts.

The governor also spoke about the opioid epidemic and touted the grant recently awarded to the University of Kentucky intended to reduce overdose deaths and addiction in Kentucky. Related, he spoke about the importance of rehabilitating and re-assimilating those leaving prison.

The governor said both the president and vice president will come to Kentucky in the coming months during the campaign.

In closing Bevin said, “You don’t owe me your vote … vote your values, not your party. Vote for who you think will fight for you.” He further asked the crowd, “Who would you want working on your behalf? Would you leave your business to me or Andy Beshear?”