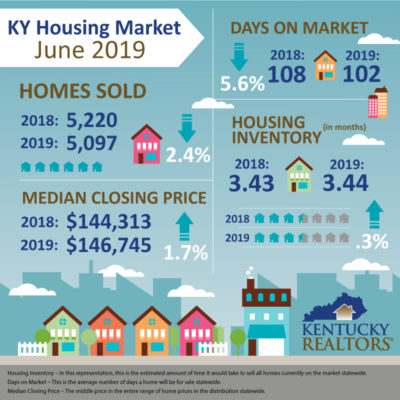 LEXINGTON, Ky. — For only the second time in the last 10 years June home sales did not top those of the previous month. June home sales have historically been three percent higher than that of May’s (of the same year). June saw a five percent drop in that figure as closings fell to 5,097 sold, down from 5,347 in May 2019.

June’s figure was down year-over-year from last June by 2.4%. Strong spring sales this year still have the year-to-date closings at a record pace, though slowing, at 25,402 homes sold. This is up almost one percent from this time last year (25,179). 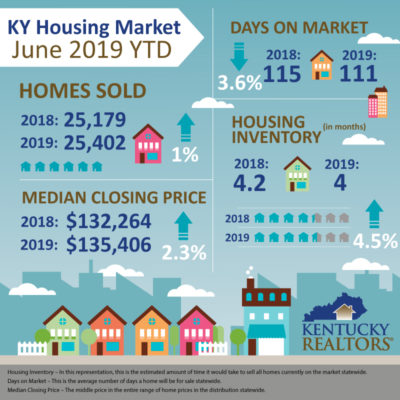 “Home sales are running at a pace similar to 2015 levels — even with exceptionally low mortgage rates, a record number of jobs and a record high net worth in the country,” said Lawrence Yun, NAR’s chief economist.

Yun says the nation is in the midst of a housing shortage and much more inventory is needed. “Imbalance persists for mid-to-lower priced homes with solid demand and insufficient supply, which is consequently pushing up home prices,” he said.

Yun said other factors could be contributing to the low number of sales. “Either a strong pent-up demand will show in the upcoming months, or there is a lack of confidence that is keeping buyers from this major expenditure. It’s too soon to know how much of a pullback is related to the reduction in the homeowner tax incentive.”

June’s days-on-market figure is down over five percent to 102 days. This is nearing the all-time low of 95 set last July. The year-to-date DOM figure is slightly higher at 111 days, down almost four percent from 2018’s mark of 115 days.

Rip Phillips, president of Kentucky Realtors, says that Kentucky’s sales slowdown is mirroring the nationwide sales dip. “We knew this correction was coming this year, we just didn’t know exactly when”, he said. “What remains to be seen is when home prices will level-off this summer. Realtors know well that higher prices mean that some consumers who want to buy a home will just have to wait longer.”