Home » Office of General Counsel to be restructured 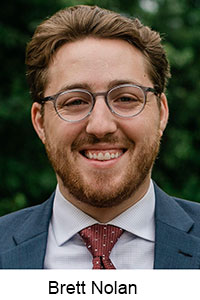 FRANKFORT, Ky. — Stephen Pitt, general counsel to Gov. Matt Bevin, announced Wednesday a restructuring of the Office of General Counsel, effective immediately, as the result of the hiring of a fourth attorney, Brett Nolan.

Nolan, a native of Lexington, Ky., is a graduate of the University of Kentucky and the University of Chicago Law School. He clerked for U.S. District Judge Karen Caldwell prior to joining the law firm of Dinsmore and Shohl in its Lexington office. In 2017, he joined the Bevin administration as general counsel in the Finance and Administration Cabinet. He left that position in the summer of 2018 to serve as a law clerk to Judge John Nalbandian, whom President Trump had recently appointed to the U.S. Court of Appeals for the 6th Circuit.

The addition of Nolan as a deputy general counsel allows the office to modify its structure to adapt with the reality of its function. Since the beginning of the Bevin administration, the office has assumed the unprecedented role of directly representing the governor and the Commonwealth of Kentucky in the most significant legal challenges to the constitutionality of Kentucky’s laws.

Since Dec. 2015, the office has tried numerous cases to judgment and has handled appeals in the Kentucky Supreme Court and Kentucky Court of Appeals, as well as cases in federal district courts and federal courts of appeal in the 6th Circuit and the District of Columbia. This heavy litigation and appellate load has been in addition to the day-to-day legal advice and services provided to the governor, cabinet secretaries, and cabinet general counsel, as well as legislation review, bill drafting and advice, and advice relating to commutations, pardons and judicial appointments by the governor.

With the addition of Nolan, and in recognition of the reality of the office’s functions, S. Chad Meredith, who has served as chief deputy general counsel since Dec. 8, 2015, has assumed the newly created position of solicitor general within the Office of General Counsel and will oversee all major appellate work in the Executive Branch of state government, including appeals involving all state cabinets and offices other than constitutionally elected officials.

Meredith, a native of Leitchfield, Ky., is a 2004 graduate of Washington and Lee University and a 2007 graduate of the University of Kentucky College of Law. He served as a law clerk for U.S. District Judge Amul Thapar and Judge John Rogers on the U.S. Court of Appeals for the 6th Circuit. Before joining the administration he practiced for six years with the Frost Brown Todd law firm in Louisville and the Roach & Ransdell law firm in Lexington.

Kuhn, a native of North Carolina, is a 2008 graduate of Furman University and a 2011 graduate of Columbia Law School. Before joining the Office as a Deputy General Counsel in 2017, he practiced at Jones Day in Washington, D.C. and with Stoll Keenon Ogden, PLLC, in Louisville, and clerked for Judge Raymond Gruender on the U.S. Court of Appeals for the 8th Circuit.