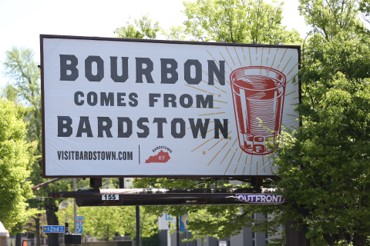 The Destiny Award celebrates this year’s best creative work for destination marketing and promotion. To become a finalist for the award, Bardstown, Ky., had to demonstrate a strong objective for the project, be creative, demonstrate impact and include relevant impressions to showcase the project’s success.

“Winning a national travel award like the Destiny is a huge victory for Bardstown Kentucky,” said Mike Mangeot, the commission’s executive director. “Our goal was to create a campaign that would shed light on our friendly town while showcasing what all the beautiful bourbon town has to offer to put us on the map.”

The judges commended the winning campaign for its clear and strategic effort to target a specific niche in the market with tactics felt to be authentic, defendable and that captured the unique character of the destination.

Louisville-based advertising agency Doe-Anderson worked closely with Mike Mangeot, the tourism bureau’s executive director to produce the winning work. The driving idea of the campaign was to singularly focus on introducing Bardstown as a unique and immersive bourbon-tasting experience with an authentically local vibe to millennial males.

The creative campaign was optimized in metro markets with populations of more than 1.5 million that are a one-to-three-hour drive from Bardstown and drove home the message: Bourbon comes from Bardstown.

With the current bourbon boom, the campaign sought to remind tourists that the best bourbon comes from the place that has been making it for well over a century and is home to some of the world’s most famous distilleries — Bardstown, Ky.

Combined with a retro-hip visual treatment, the message was plastered over billboards, posters, bus shelters, T-shirts, table tents and coasters in target bars and restaurants.

The digital efforts of the campaign also drove 23,490 sessions to the website, which accounted for 23.8 percent of the total traffic during that time period with organic search traffic increasing 23.6 percent year over year.

The winning submission can be seen here: https://ustravel.secure-platform.com/a/gallery/rounds/9/details/3682