“Sales activity continues to be strong throughout the Central Kentucky region despite low inventory in most areas,” said Al Blevins, president of the Lexington-Bluegrass Association of Realtors (LBAR). “Homes coming on the market are selling at an extremely fast pace when priced correctly, which has resulted in driving inventory levels even lower.”

New listings on the market rose 8% in July, to 1,873, but the increase in listings didn’t make up for the low inventory caused by the surge in sales as total active properties were down 4% to 3,968 homes currently available.

Nationally, housing starts dropped for the third straight month in July, mainly due to a steep decline in multi-family housing, however, single-family homebuilding increased 1.3% to the highest level in six months. And building permits surged 8.4% for the month, the largest gain since June 2017.

This is good news for the housing market and comes at a time when pending sales for July jumped to the highest year-over-year level seen in 2019, increasing 12%, with 1,449 pending sales versus 1,294 in 2018. This should translate into strong sales numbers for August.

“Consumers are taking advantage of the robust economy and historically low interest rates being offered,” said Blevins. “Sales are happening at a frantic pace as qualified buyers are actively in the market at a time when they can afford to purchase and mortgages are at levels, currently around 3.5 percent, that seem to trend down every month.”

Homes stayed on the market an average of 42 days in July, the same as a year ago. Two-thirds of all properties sold in the first 30 days of being listed for sale, with a total of 80% selling in the first two months of being made available.

“Moving into the last few weeks of summer and starting the fall season, the real estate market is looking strong here in the Bluegrass,” continued Blevins. “As long as the economic factors remain on good footing and rates are low, the fall months should remain solid for local real estate.”

With July homes sales up nationally, NAR chief economist Lawrence Yun has noted that because of lower mortgage rates, the second half of year will be notably better than the first half in terms of transactions. And that follows the positive report from the Fannie Mae Home Purchase Sentiment Index, which reached a new survey high in July, and the National Association of Home Builders Housing Market Index hit the highest levels since October. 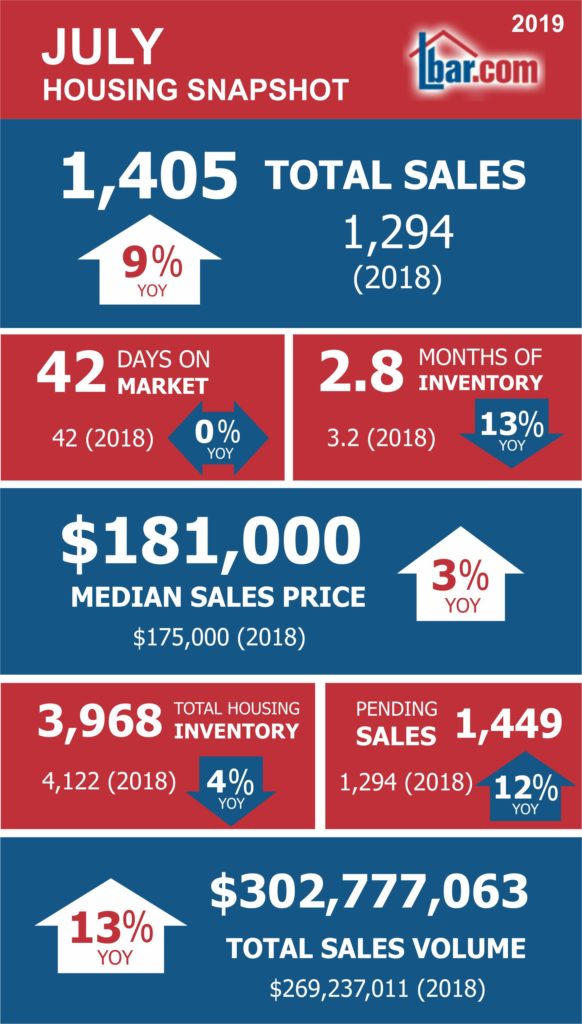 CHFS names new commissioner for Kentucky’s Department for Public Health
Berea College ranked No. 1 Bang for the Buck and No. 4 liberal arts college by Washington Monthly