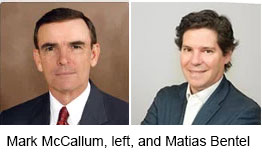 McCallum joined Brown-Forman in 2003 as chief marketing officer, and has made many significant contributions to the company’s success over the past 16 years. He advanced the company’s international expansion during his years as COO and elevated the organization’s brand-building capabilities in his current role. Throughout his tenure, he has been a champion and steward of Brown-Forman’s brand-building efforts and marketing capabilities globally.

McCallum also provided valuable leadership in support of the company’s work on diversity and inclusion with his commitment to Brown-Forman’s ongoing journey in pursuit of gender equality. He has served as co-executive sponsor of GROW (Growing Remarkable & Outstanding Women), Brown-Forman’s employee resource group to support gender parity, since 2016.

“Mark has a unique blend of strategic, marketing and operational talent which has been a tremendous asset to Brown-Forman,” said Brown-Forman President and Chief Executive Officer Lawson Whiting. “He has been a valued member of our executive leadership team and a steward of the growth of our company and its brands. Mark has made a positive and lasting imprint on Brown-Forman and for that we are grateful.”

Brown-Forman also announced that Matias Bentel will become chief brands officer effective Jan. 1, 2020. Bentel is a 10-year veteran of the company, and since 2018 has served as senior vice president, managing director, Jack Daniel’s Family of Brands, working closely with McCallum and the rest of the brands leadership team.

Bentel joined Brown-Forman in 2008 as marketing director, Latin America and Caribbean. He served in progressively more senior marketing roles for the Latin America region before being promoted to vice president, chief of staff in 2014 and vice president, general manager Mexico in 2016. In addition, Bentel is also serving as executive sponsor of COPA, Brown-Forman’s employee resource group that supports Hispanic and Latin employees.

Prior to joining Brown-Forman, Bentel served as marketing manager, Latin America and Caribbean for Diageo from 2005-07 and held a variety of marketing positions with Allied Domecq between 1997-2005.

“Matias has a broad range of marketing and general management experience, and has been an active member of our company’s regional and marketing leadership teams since 2014, where he has participated in the consideration of some of the company’s most important strategic and operational topics,” stated Whiting. “Matias was identified as our next chief brands officer through an extensive selection process. Those who have worked with him over the last decade know him to be a proven leader with a deeply analytical mind who has demonstrated that he is ready to take on the important responsibilities of chief brands officer for Brown-Forman.”

Bentel received a bachelor’s degree from the Pontifical Catholic University of Argentina.