The preliminary August 2019 jobless rate was unchanged from the 4.4% recorded for the state in August 2018.

The U.S. seasonally adjusted jobless rate for August 2019 was 3.7%, unchanged from July 2019, according to the U.S. Department of Labor.

In a separate federal survey of business establishments that excludes jobs in agriculture and people who are self-employed, Kentucky’s seasonally adjusted nonfarm employment decreased by 3,500 jobs in August 2019 compared to July 2019. Kentucky has added 19,400 jobs since August 2018, for a growth rate of 1%.

“Losses in durable goods manufacturing and professional business services contributed to lower nonfarm payroll employment in August,” said University of Kentucky’s Center for Business and Economic Research (CBER) Interim Director Mike Clark, Ph.D. “The household survey indicates that workers entered the labor force at a faster rate than they were finding jobs. This pushed August’s unemployment rate up, even though more people worked in August than in July.” 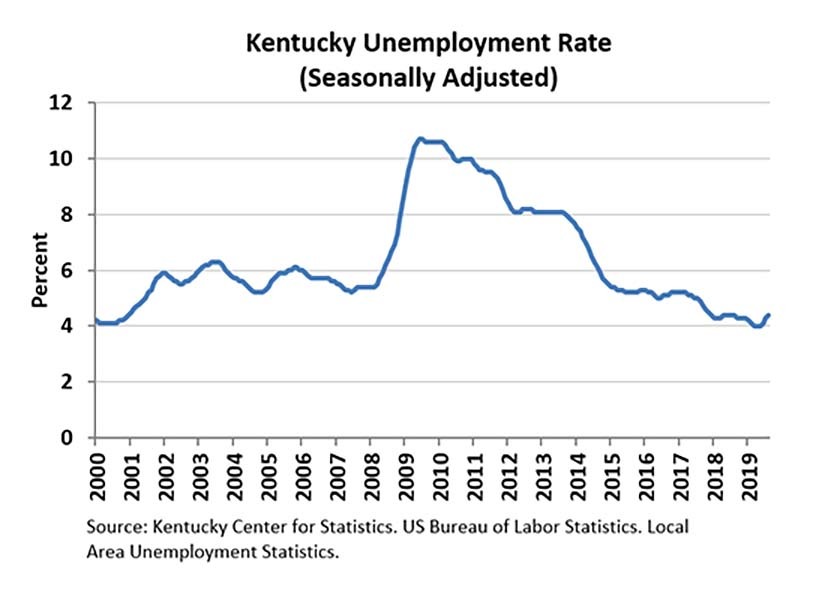 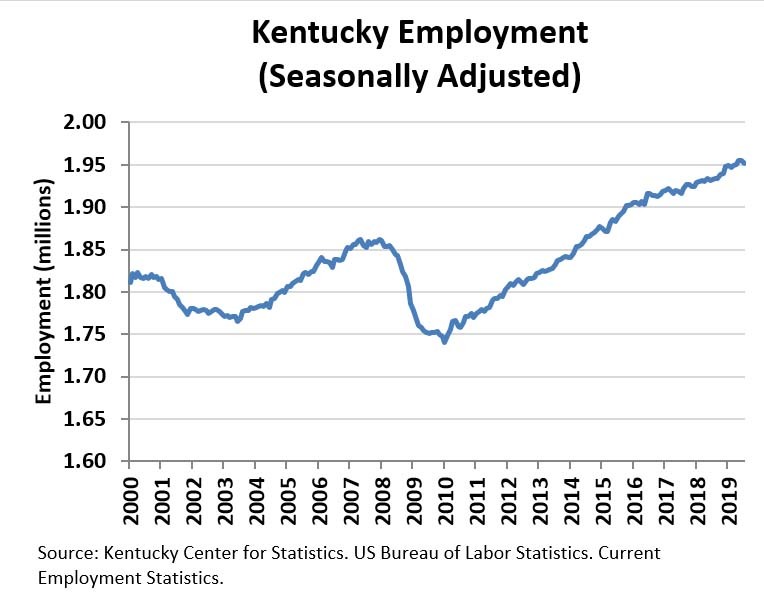 Kentucky’s leisure and hospitality sector grew by 900 positions from July 2019 to August 2019. This sector is up 3,100 positions since August 2018. Within this sector, employment in the arts, entertainment and recreation fell by 500 jobs, while accommodations and food services increased by 1,400 jobs.

Employment in the information services sector rose by 100 jobs in August 2019. This sector was unchanged since August 2018. The industries in this sector include traditional publishing as well as software publishing; motion pictures and broadcasting; and telecommunications.

Financial activies sector jobs increased by 100 jobs in August 2019. This increase occurred in the finance and insurance subsector. Employment in the real estate, rental and leasing subsector was unchanged in August. The sector was up 500 jobs compared to last August.

Employment in Kentucky’s educational and health services sector fell by 100 jobs in August 2019. The educational services subsector lost 300 jobs, while health care and social assistance subsector added 200 jobs. Since last August, the sector has expanded by 9,500 positions or 3.4%.

Construction employment fell by 500 jobs in August 2019. The construction sector was up 500 jobs or 0.6% during the past year.

“The decrease in Kentucky’s durable goods manufacturing subsector is consistent with concerns that current trade policy could be dampening manufacturing growth,” said Clark. “However, it is too early to know whether this will persist or just be a temporary decrease.”

The professional and business services sector employment fell by 3,000 jobs or 1.4% in August 2019. This sector was down 1,400 jobs since August 2018. The month-over-month losses occurred primarily in the administration and support and waste management subsector, which fell by 2,900 jobs in August. Employment in the professional, scientific and technical services subsector fell by 200 jobs. Management of companies was up 100 positions.

“The jobs losses in professional and business services accounted for a large share of the state’s total employment decrease in August,” said Clark. “However, while this sector often experiences monthly fluctuations, the overall trend has been fairly stable.”