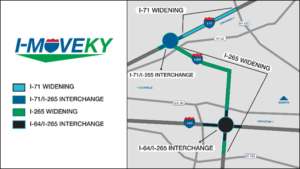 LOUISVILLE, Ky. — The Kentucky Transportation Cabinet (KYTC) has selected a design-build team led by Hall Contracting and American Engineers Inc. to design and construct the I-Move Kentucky interstate project. The four-year, $180 million construction project includes improvements to I-265, I-71 and I-64 through a heavily traveled corridor in Jefferson and Oldham counties.

I-Move Kentucky is the largest single construction project in Kentucky since the Ohio River Bridges Project was completed in 2016.

Hall Contracting will deliver the major project using a design-build approach that combines what had been four, individual projects near I-265, also known as the Gene Snyder Freeway. The Hall/AEI team will begin planning and pre-construction activities this fall, and some construction will start in early 2020.

“I-Move Kentucky is a bold transportation initiative that will provide motorists and businesses significant benefits – reduced congestion, increased safety, and greater mobility,” said KYTC Secretary Greg Thomas. “This is yet another example of rapid economic development supported by Gov. Matt Bevin in this region and around the Commonwealth. Combining these projects into one will significantly accelerate construction and reduce the amount of time travelers will be impacted by our work.”

The I-Move Kentucky project will add lane capacity and upgrade major interchanges to roadways that are important to the state’s transportation system and regional economic development. Employers of tens of thousands of workers, including Kroger Co., Ford Motor Co., and UPS Inc., rely on the corridor to move products throughout the state and region.

Construction on the I-Move Kentucky project will begin in spring 2020. KYTC and the design-build team are developing detailed plans for the construction schedule, but no specific dates have been set to start work.

Construction will begin on the I-71/I-265 interchange improvements in early spring and be completed by the end of next year. Construction work is also expected to start in 2020 on portions of the I-71 widening. The I-265 widening and I-64/I-265 interchange improvements are expected to begin in 2021. The entire project is scheduled to be completed in late 2023.