Home » Kentucky 7th in U.S. for fatalities due to running red lights 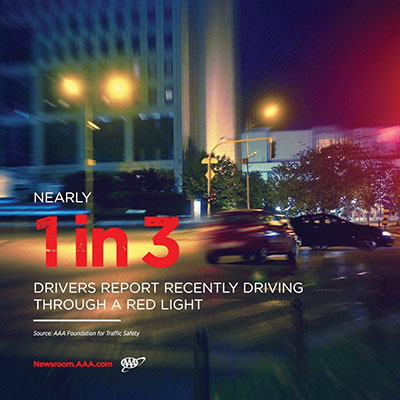 The number of people killed as the result of impatient, distracted and reckless drivers running red lights has spiked sharply in recent years, according to analysis of crash data by the AAA Foundation for Traffic Safety. And almost 65 percent of the time, the victim is not the offending driver.

Statistics indicate that deaths caused by drivers running red lights jumped almost 30% from 2012 to 2017, the most recent year for which crash data is available. Impatient, distracted, and reckless drivers racing through red lights claim at least two lives every day across the U.S.

The most recent crash data available shows that in 2017, there were 939 people killed in crashes caused by running red lights – a 10-year high.

With the number of crashes caused by running a red light on the rise, AAA calls for drivers to use caution when approaching signalized intersections, and for pedestrians and cyclists to stay alert when crossing the street.

According to the AAA Foundation:

• 28 percent of crash deaths that occur at signalized intersections are the result of a driver running through a red light.

• Per capita, Arizona has the highest rate of red light running fatalities while New Hampshire has the lowest rate.

• Nearly half (46 percent) of those killed in crashes caused by running red lights were passengers or people in other vehicles and more than 5 percent were pedestrians or cyclists. Just over 35 percent of those killed were the drivers who ran the red light.

Eighty-five percent of drivers view red light running as very dangerous, yet nearly one in three say they blew through a red light within the past 30 days when they could have stopped safely, according to the AAA Foundation’s latest Traffic Safety Culture Index.

While enforcement is the best way to get drivers to comply with any law, it is impossible for police to be at every intersection. The Insurance Institute for Highway Safety (IIHS) found that when properly implemented, red light cameras reduced the fatal red light running crash rate of large cities by 21 percent and the rate of all types of fatal crashes at signalized intersections by 14 percent.

Per capita, Kentucky has the 7th highest rate of fatalities caused by running red lights, with 3.4 deaths per 1 million population, according the AAA Foundation analysis of state data from 2008-2017.