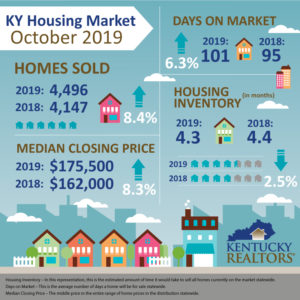 LEXINGTON, Ky. — Fourth-quarter home sales in Kentucky began with a strong October. Year-to-date home sales through October stands at 43,353 units and was an almost 5% increase over the 2018 total of 41,352. A strong October sales mark of 4,496 (up 8.4% over 2018) holds the state near record-breaking territory. Sales volume in the Commonwealth saw nearly a billion dollars in inventory change hands. The figure of $940 million was up an impressive 16.8% over October 2018 ($805 million).

Across the nation, total existing-home sales increased 1.9% from September to a seasonally adjusted annual rate of 5.46 million in October. Despite lingering regional variances, overall sales are up 4.6% from a year ago (5.22 million in October 2018).

Lawrence Yun, chief economist for the National Association of Realtors, said this sales increase is encouraging and he expects added growth in the coming months.

“Historically-low interest rates, continuing job expansion, higher weekly earnings, and low mortgage rates are undoubtedly contributing to these higher numbers,” said Yun. “We will likely continue to see sales climb as long as potential buyers are presented with an adequate supply of inventory.”

October’s days-on-market (DOM) figure inched back up once again to 101 days. This is an increase of 6% over last year’s 95 days in October of 2018. Year-to-date, it is taking homes an average of 103 days to go under contract once listed.

Rip Phillips, President of Kentucky Realtors, reports that Kentucky’s market outperformed the south region of the U.S. in October.

“Sales in the south are up about 7%”, Phillips said. “The state of Kentucky, fueled by this robust and growing economy, showed an increase of almost 8.5%. The affordability here is also allowing people to enter the market that previously could not do so. Lower mortgage rates are keeping the cost of owning a home stable even while the sale prices are steadily increasing.”

The inventory number for the state slipped slightly to 4.3 months. This is down just 2.5% over last October’s total of 4.4 months. Most economists believe a balanced housing market offers a six month inventory level.