Louisville is known for its blend of passion for bourbon and tourism that has become known as “bourbonism.”

The city has long served as the gateway to Bourbon Country, a starting point for scenic tours of countryside distilleries. But Louisville has been developing its own unique experience, dubbed the Urban Bourbon Experience. It started with the opening of the Evan Williams Bourbon Experience in 2013 and has grown into an adventure through the Greater Louisville region to 10 bourbon attractions and distilleries.

Tourism is the third largest industry in Louisville, supporting more than 27,000 local jobs. Louisville relies heavily on the $3.5 billion in visitor spending generated for the local economy. Bourbon is part of the city’s heritage and culture, and it plays a large role in tourism. Still, the “Bourbon City,” just like scores of big cities across the country, has faced monumental challenges in attracting leisure travelers as the country grapples with COVID-19 and its economic repercussions, civil unrest and repeated admonitions to “just stay home.”

With social distancing measures still recommended, the big question is how Louisville’s bourbon tourism can bounce back toward the end of the year and into 2021. The operators of the region’s attractions are anxiously waiting for visitors to return.

Early in the year, before the pandemic rocked the world, Louisville was preparing for a 2020 tourist season that might have even surpassed the impressive numbers of the previous year, when an estimated 16.4 million people visited the city for leisure and business.

The Kentucky Derby Museum hit its all-time attendance peak of nearly 243,000; the Louisville Slugger Museum had one of its best years since opening in 1996, with more than 318,000 visitors; and the Evan Williams Bourbon Experience set yet another attendance record when it opened its doors to about 110,000 people in 2019.

But by mid-March, many of the most popular attractions in the city and the state, including the statewide Kentucky Bourbon Trail and Louisville’s Urban Bourbon Trail, had to shut down in an attempt to halt the spread of the virus.

“The pandemic has hopefully only temporarily crippled the tourism industry in general and bourbon tourism is part of that,” said Stacey Yates, vice president of marketing and communications for Louisville Tourism, the region’s convention and visitors’ bureau.

“Every year (since opening) we’ve grown, so last year would have been the highest attendance number,” said Jeff Crowe, general manager of the Evan Williams Bourbon Experience in downtown Louisville. “This year, we won’t see that (level of attendance), but we’re going to try like heck when we reopen the doors.” [Crowe was interviewed before tourist attractions were able to reopen.]

Said to be the second most popular bourbon in the world, Evan Williams is one of the brands produced by Heaven Hill, a family-owned spirits company based in Bardstown, which bills itself as the “Bourbon Capital of the World.”

Heaven Hill and Louisville’s Brown-Forman – whose brands include Jack Daniel’s, Woodford Reserve, Old Forester and Early Times – had been producing a third of the world’s bourbon in Louisville for decades before they opened their doors to the public for tours, according to Yates, who has more than a casual understanding of bourbon and its importance to Louisville and the state.

Yates is credited with positioning Louisville as the “Gateway to Bourbon Country,” which linked the city to the burgeoning Kentucky Bourbon Trail in 2008. At that point, the trail had just eight participating distilleries and was only beginning to establish itself as an attraction that could lure thousands of tourists to the state. Her team also created the Urban Bourbon Trail campaign that same year and focused on lining up bars and restaurants that would cater to “bourbon tourists” who were visiting distilleries elsewhere in the state.

Before COVID-19, 46 bars and restaurants were stops on the Urban Bourbon Trail.

Eric Gregory, president of the Kentucky Distillers Association, acknowledged that bars and restaurants “will take a hit” because of the pandemic, but said it hasn’t had much of an impact on distillers.

In fact, distillers across Louisville and the commonwealth came to the rescue when both stores and suppliers couldn’t keep up with the demand for hand sanitizer, utilizing their alcohol and production lines to meet the need.

The Kentucky Bourbon Trail now includes 21 distilleries all over the state – all of which are required to feature a visitor’s center and offer distillery tours – and will celebrate its 21st birthday this year.

Although Louisville had lined up bars and restaurants for the Urban Bourbon Trail, the city didn’t have a formal link to the Kentucky Bourbon Trail until late in 2013, when Heaven Hill decided to step up promotion of its Evan Williams brand by opening the distillery and visitor center in downtown Louisville.

Both Gregory and Yates stressed that Heaven Hill’s decision was absolutely critical to expanding the tour into the state’s largest city and making the tour more successful.

“One of the reasons that Louisville is considered the gateway city is that they have fantastic hotels, great places to eat and plenty of other things to see,” Gregory said.

Yates said the Urban Bourbon Trail prints and distributes 60,000 “passports” each year that help bourbon tourists keep track of where they’ve stopped along the trail. But she said it’s difficult to distinguish how many people visit Louisville just for bourbonism from those who had other priorities when they visited the city.

“We know anecdotally that we’re getting a lot of recognition for Louisville because of the bourbon experience – because it is so unique – and while that may not be the only driver for selecting Louisville to visit, we think it certainly played a large role in helping form an identity for the city,” she said.

Before Prohibition, which ran from 1920 to 1933, a stretch of Main Street downtown was known as “The Wall Street of Whiskey,” according to Yates, adding that more than 50 bourbon-related businesses were located along what was also known as “Whiskey Row.”

As might be expected, the distillers’ association in Frankfort emphasizes that the business of bourbon is vitally important to the state. About 95% of the world’s bourbon is produced in Kentucky, where it’s an $8.6 billion industry with some 5,000 distillery jobs and more than 15,000 that are linked directly to the distilleries, according to a 2019 economic impact study. Bourbon tourists made 1.4 million stops in Kentucky last year, the association said.

While Louisville has enjoyed substantial tourist growth through bourbonism, Bardstown – about 45 minutes away – also has prospered.

The state’s Cabinet for Economic Development reported that in the last year, Heaven Hill, the Bardstown Bourbon Co. and the Willett Distillery announced nearly $82 million worth of expansion projects for a city and a county that attracted 450,000 bourbon tourists last year. Eight distilleries are in or near Bardstown while a ninth, Log Still in nearby New Haven, is scheduled to open this year. Maker’s Mark, less than a half hour south in Loretto, is promoted as part of the Bardstown bourbon experience.

While it may take a bit of time for tourists to return to the region’s bourbon attractions, bourbon lovers will not be able to stay away for long. After all, as the distillery association’s president says, “In Kentucky, bourbon is a way of life.”

“These companies worked quickly and tirelessly to source the materials and manufacture this essential product for Kentuckians fighting on the front lines of this pandemic,” said Kentucky Gov. Andy Beshear.

To put the amount into perspective, KDA President Eric Gregory said 125,000 gallons of hand sanitizer would equal more than 630,000 “fifths” of whiskey, or 750ml bottles as they are labeled today. 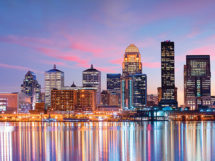 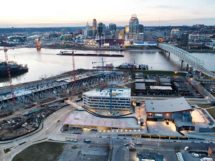 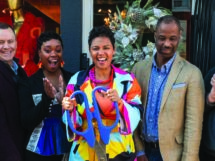