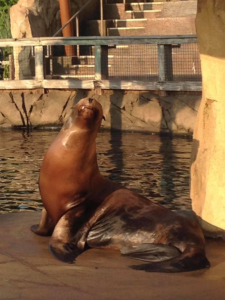 “It is never easy to say goodbye to one of our animal ambassadors. Triton is certainly no exception,” said Louisville Zoo Director John Walczak. “Triton lived a good long life at Glacier Run thanks to our excellent keepers and veterinary staff. In the remnant wild, even under the best circumstances, Triton’s lifespan would have been significantly shorter.”

“Triton was having increasing difficulty with mobility and was visibly in pain. He struggled to get in and out of the pools, maintain balance during swimming, move normally on land, and live with other sea lions.  Sometimes, when a geriatric zoo animal can no longer do any of the things they used to do, euthanasia is the kindest option — although always a difficult and carefully deliberated decision,” said Senior Staff Veterinarian Dr. Zoli Gyimesi.

Triton came to Louisville in 2010 from the Birmingham Zoo in Alabama where he was born. He lived at the award-winning Glacier Run exhibit and shared the 108,000-gallon main saltwater pool on rotation with California sea lions Bart, Gremlin, and Riva; harbor seals Tonie and Oscar; and gray seals Boone, Minnow, and Rona.

The median life expectancy for a California sea lion in a managed system is 23.3 years.

California sea lions are considered sentinel species, helping to indicate ocean health. Although the Marine Mammal Protection Act has afforded protections that have allowed California sea lions to rebound, they still face challenges in the remnant wild. Entanglement in fishing gear, as well as the increase of biotoxins from harmful algal blooms in their bodies, have led to illness, deaths, and the abandonment of pups and human-caused injuries are the main threats to the species.