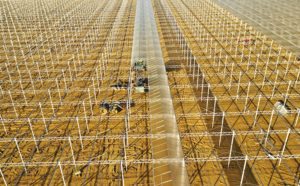 BEREA, Ky. — AppHarvest has started construction on a third high-tech controlled environment agriculture facility in Central Appalachia and is expanding into growing leafy greens. Located in Berea, Ky., the farm, when complete, will be 15 acres. The indoor facility will grow non-GMO, chemical pesticide-free leafy greens to be distributed to U.S. grocers and restaurants. Because of the company’s strategic location in Appalachia, AppHarvest can reach nearly 70% of Americans in just a day’s drive, reducing transportation costs by up to 80% compared to existing growers.

American production is concentrated in Arizona and California, which combine to grow 90% of U.S.-grown leafy greens. These states are in the midst of a decades-long drought and are consuming precious water resources. By contrast, Central Appalachia, where AppHarvest is investing in building controlled environment agriculture facilities, has an abundance of rain. The facility in Berea, like AppHarvest’s other controlled environment agriculture facilities, will be designed to have its water needs met entirely by recycled rainwater using a closed-loop irrigation system where all water not absorbed by the plants is cleaned using sand and UV and then reused.

The facility will continue to expand AppHarvest’s growing space in Central Appalachia. AppHarvest opened its flagship farm — a 2.76-million-s.f. facility growing tomatoes — last week in nearby Morehead, Ky., and also broke ground for a second facility of similar size in Madison County outside Richmond, Ky. (Berea also is located in Madison County.)

“Leafy greens are grown almost exclusively in states with little water and then travel thousands of miles to most Americans. We’re working to create a more resilient American food system, and water usage is at the heart of the issue,” said AppHarvest Founder and CEO Jonathan Webb.