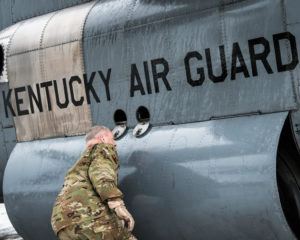 The 123rd Airlift Wing, based in Louisville, is among the most highly-decorated ANG units in the nation has received 18 Air Force Outstanding Unit Awards. The Kentucky Congressional Delegation contacted Secretary of the Air Force Barbara Barrett on multiple occasions in support of the unit’s selection, touting its premier abilities and strategic location.

The Kentucky ANG’s current squadron of eight C-130H aircraft is rapidly aging and in need of recapitalization. The new C-130J aircraft offers improved capabilities to fulfill the ANG’s missions domestically and abroad. In particular, the new model will provide the Kentucky ANG a 25% greater immediate response capability when executing its emergency and disaster response missions. Stationing the C-130J aircraft in Louisville is not only a cost-effective basing decision, but will also maximize the value of its increased capacities.