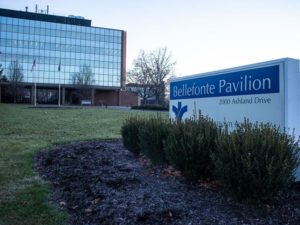 The Greenup Fiscal Court opened sealed bids on Monday for the purchase of the Pavilion. The special meeting was called, not because of the bids, but because one of the court members had previously communicated to the court that they would not be able to attend the regularly scheduled court meeting.

Two bids were offered for the pavilion building and all property involved with it — the property was donated to Greenup County by Bon Secours Health System. It was declared surplus in December.

King’s Daughter’s Medical Center (through CEO Kristie Whitlatch) submitted a bid for $3 million. The economic impact addressed by KDMC is the generation of jobs and increased service capacity for the area.

This will permit the expansion of clinical services at KDMC, resulting in about 150 new jobs. The Pavilion building previously housed administrative offices for Our Lady of Bellefonte Hospital.

The court voted to award the sale to KDMC by a nearly unanimous vote; the sole exception was Earnie Duty II, who abstained from voting because of his employment through KDMC.