Known for two of their former tenants – the old YMCA and Gateway bookstore – the buildings at the southeast corner of Madison Avenue and Pike Street in Covington have sported many “looks” over the last Century, including an old-style turret, the ‘70s-era “radiator grille,” and the current brick arches and canvas awnings.

They’re about to get another look, one that’s much more modern. 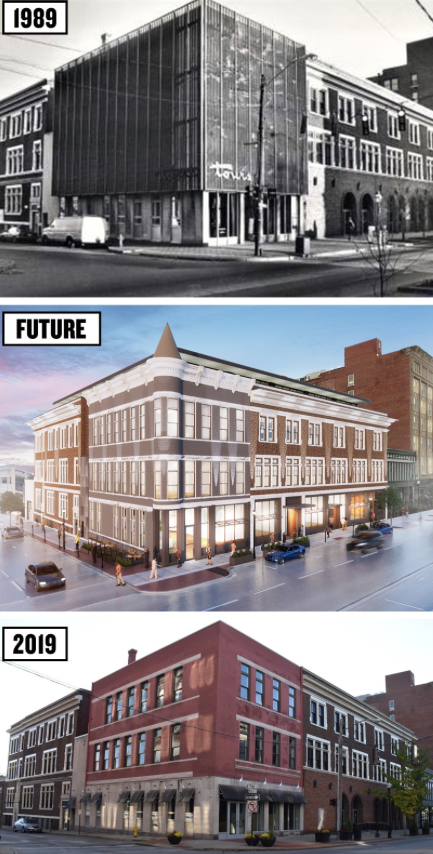 Construction barriers will be erected soon around the two historic buildings, kicking off the exterior part of their long-anticipated $22.5 million transformation into a multi-use complex featuring a “bourbon distillery experience,” an addition to Hotel Covington, and office space.

“This is one of the most visible corners in the city, and Covington has been waiting for years to have the right developer with vision,” Economic Development Director Tom West said. “We now have that – and when this project is complete, I think everyone will agree it was worth the wait!”

The work will impact vehicular and pedestrian traffic near the project, especially during periodic delivery of building materials, said Bill Matteoli, the City’s Assistant Project Engineer. To help mitigate that impact:

The project was announced in December 2019 and interior demolition began the following January on its two buildings:

The development team consists of the Salyers Group, creators of nearby Hotel Covington, and the related vR Group. Turner Construction is doing the work.

When complete, the complex will include a “bourbon distillery experience” that will serve as the northern trailhead for the Kentucky bourbon industry … about 60 VIP and Presidential suites serviced by staff and management of Hotel Covington … and 10,000 square feet of office space, according to the developers.

The development is projected to create over 100 jobs, not including potential office tenants.