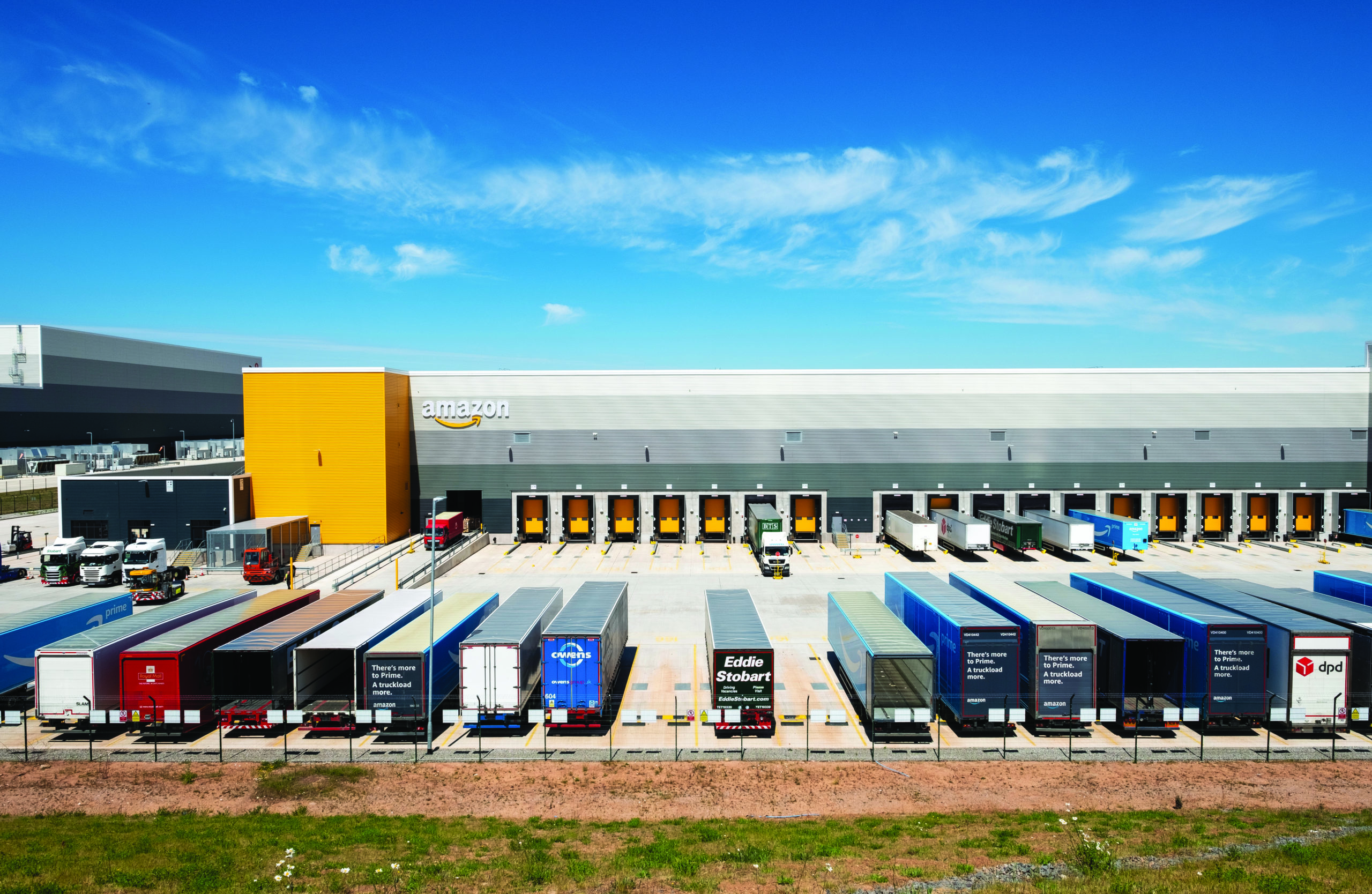 Kentucky’s office, industrial and warehouse/distribution real estate sector fared at least as well as the national market generally and outperformed in its important logistics segment during a difficult year of pandemic disruption. Key commercial real estate operators are optimistic about the rest of 2021.

Top commercial property firms in Louisville and Lexington report vacancy rates of only 3-5% across all their properties — even before COVID vaccination progress prompted steps back toward “normal” commercial activity.

Kentucky’s logistics sector benefited from the jump in e-commerce that came after the pandemic sent millions of Americans home to work and restricted in-person shopping options Lexington entered 2021 with a mere 1.5% vacancy rate for its 8.6 million s.f. of warehouse space, according to a 2020 CRE Market Report from the NAI Isaac.

There is no exact equivalent data for Louisville’s much larger warehouse and logistics space, but Louisville’s overall industrial category had a 4.7% vacancy rate in the fourth quarter of 2020, according to global commercial real estate services provider Cushman & Wakefield.

Although 5.3 million s.f. of new industrial space opened in Louisville last year and another 3.8 million s.f. was under construction, Cushman & Wakefield optimistically said: “The low vacancy rate shows the need for the new construction as more supply is needed to keep up with the high demand in the market.”

Hollenbach Oakley is a 24-year-old commercial real estate firm in Louisville whose 27 employees manage more than 2.1 million s.f. of space through its Horizon Commercial Realty brokerage. It has multiple development projects in the pipeline that could add another 2-3 million s.f. of inventory into the Louisville market.

“I think we are going to see a pretty quick recovery,” said Managing Partner John Hollenbach. “There was a lot of momentum before the pandemic hit, and that is starting to take effect again.”

Hollenbach Oakley is active in distribution and flex space, retail, medical office and traditional offices. It is the master developer of the River Ridge Gateway office park adjoining I-265 in Southern Indiana.

The national average vacancy rate for light industrial/logistics space over the past 10 years is 6%, according to Cushman & Wakefield, which nowadays considers property in that sector “a recession-proof asset.” Hollenbach Oakley property across all sectors has a 3-5% vacancy rate, Hollenbach said.

Northern Kentucky, a logistics powerhouse, shattered its 2019 numbers. New development of commercial and industrial projects show a permitted value of $568 million, a figure that is 25% greater than that of 2019 and double that of 2018.

Reinvestment in existing commercial and industrial projects also grew in 2020, at a pace 11% above 2019. Construction of the new Amazon Air Hub is fueling a lot of that growth, continuing to spark interest in the region from companies that work alongside Amazon or benefit from its presence at the Cincinnati/Northern Kentucky International Airport (CVG).

The behemoth Amazon Air Hub will cover 970 acres at CVG. It includes a 3-million-s.f. package center that will service 200 to 300 trucks at any given time, plus a parking area for about 100 cargo airplanes. Amazon expects to open the $1.49 billion hub in later this year.

The Paul Hemmer Co. has been focused on new industrial and logistics facilities throughout NKY. Hemmer’s Amazon-related projects in 2020 include a 25,000-s.f. transportation facility in Hebron for TGT Transport; a 139,000-s.f. speculative building in Hebron for CA Industrial; and an 8,300-s.f. food-grade facility in Erlanger for candy maker Perfetti Van Melle.

“Our new commercial/industrial capital investment number for the first three quarters back in 2018 was around $184 million,” said Brian Miller, executive vice president of the Building Industry Association of Northern Kentucky. “In 2019, the same kind of greenfield development for the first three quarters climbed up to $313 million. [In 2020], new commercial/industrial capital development jumped to $532 million, largely because of the Amazon Air Hub and associated projects.”

According to commercial property information company CoStar, over the next five years, 22.4 million s.f. of industrial development will be undertaken in the Cincinnati metropolitan statistical area – 53% of that growth is projected to be in Northern Kentucky. The airport submarket has been the most active industrial market in the Cincinnati MSA since 2018, and Florence/Richwood has been the third most active in the MSA, according to data provided by Northern Kentucky Tri-ED.

In the Lexington market, The Webb Cos., a commercial real estate firm that has been the dominant player locally since the 1970s, also reports positive conditions early in 2021 with expectations that things should improve if COVID-19 vaccinations progress.

About 95% of its properties across all sectors are occupied and income producing, said R. Dudley Webb, chairman and co-founder of The Webb Cos.

“What we are seeing now is a return to normalcy,” Webb said.

The COVID pandemic did send many office workers home for long periods of time last year, and some impacts will be permanent; some will work from home indefinitely or permanently.

However, Webb said the majority of his tenants who have spent time working at home and then back in their office space tell him they prefer the office setting.

“It’s the social interaction of employees, the immediate accessibility of the guy next door to you. All these are factors. Plus many of the employees went stir crazy at home,” Webb said. “That’s in our favor.”

The Webb Cos. is among commercial real estate firms taking steps to improve the safety of its properties. The company is improving air filtration, adding sanitizing UVC lighting and encouraging social distancing in the use of its elevators, Webb said.

There is a higher awareness and concern for safety conditions, and ensuring the safety of tenants serves to improve occupancy and maximize rents, he said.

Just a couple of months before the pandemic arrived in March 2020, The Webb Cos. had cut the ribbon on its 12-years-in-the-making City Center project in the heart of downtown Lexington. City Center includes two Marriott properties, a Jeff Ruby’s restaurant, other restaurant and retail space, more than 100,000 s.f. of Class A office space and 13 high-end penthouse residences.

The Dinsmore & Shohl law firm moved in before the project was completed, and there were lots of prospects making serious inquiries when COVID arrived but the dramatic uncertainty that it brought led prospects to put plans on hold. The fresh new Marriott Lexington City Center saw occupancies hitting 85% until pandemic impact cut it to 15%, but now hotel operations are near normalcy, Webb said.

“People are starting to travel and the advent of the vaccine is huge,” Webb said. “Now (office tenant prospects) are back and they are doing their space planning.”

He predicts 95% occupancy of City Center by the latter portion of the year.

Commercial real estate is ‘holding its own’
The traditional office market is more disrupted in Kentucky and across the country because pandemic safety measures shut down close-group spaces a year ago and sent office personnel to work from home. Over the past year, many workers and some companies have found the arrangement so efficient they plan to maintain it.

While Louisville has some conspicuously empty Class A space downtown, Hollenbach thinks this is part of a natural cyclic change that happens as office space ages. He anticipates much of it being reoccupied within a year, not the several years that many forecast will be the case.

Hollenbach Oakley and The Webb Cos. have impressively low vacancy rates because they are “guys who are just fantastic at what they do,” said Madison Silvert, president of Owensboro-based commercial real estate firm Malcolm Bryant Corp.

Those who focus on quality and providing tenants with property they don’t have to worry about operationally and can flex with their needs will always have low vacancy rates, he said.

From Silvert’s perspective, Kentucky’s commercial real estate sector has held its own compared to the rest of the country during the disruption of the pandemic.

“The past year has not been a great boom for anyone, but I don’t think we’ve gone backwards,” he said.

Commercial property managers spent lots of time during the pandemic, especially early on, consulting with tenants about the best options to meet their obligations. In general, tenants who are part of large national companies seemed to have less flexibility and more demands to cut costs compared to smaller, more local tenants who can make their own decisions.

“This past year has shown more than ever that occupants and customers need flexibility, they need understanding (of their individual conditions), they need a real estate partner that they can trust,” said Silvert, who is a member of the real estate advisory council for the St. Louis Federal Reserve Bank. “That is and was a premium for their success.”

Businesses are keenly aware of the productivity that a good office brings to them, he said. Light industry properties, such as those used in logistics, are “doing great.”

In a state with major shipping centers such as the UPS Worldport, a DHL global hub and Amazon Prime’s first hub, and a location that is only a few hours from Nashville, St. Louis and Indianapolis, logistics “has done nothing but grow over the past year,” Silvert said. “We are fortunate to be heavily invested.”

But retail is not faring nearly so well, especially aged retail, which is tending not to backfill when new retail comes along. This is an increasingly heard story at the St. Louis Fed council, Silvert said.

One announcement of note came in early March when a Cincinnati-based international investment firm bought two Lexington apartment complexes as part of its strategy to acquire multifamily workforce housing assets. With 85% of its funds coming from Israeli citizens, Vision & Beyond Capital Investments has a strategy based on its belief that companies operating in the U.S. are increasingly looking to shift from the coasts, where business expenses and cost of living is higher, to central locations such as Ohio and Kentucky, according to Katy Crossen, who provides communications and marketing to the firm.

Three-year-old Vision & Beyond sees a strong local economy and an opportunity to upgrade housing assets with long-term demand in the Lexington market, Crossen said. Vision & Beyond has invested $84 million to acquire more than 1,500 multifamily residential units in Greater Cincinnati and is poised to invest another $200 million in Cincinnati, Columbus, Dayton and Lexington in 2021.

O’Brien said technology trends that allow individuals to work from anywhere are being recognized by those who work or operate businesses on the coasts, and especially by those who are Kentucky natives.
“We were already a pretty big ‘boomerang’ city,” he said, referencing the burgeoning trend of individuals returning to their place of origin after having left to pursue career opportunities. ■