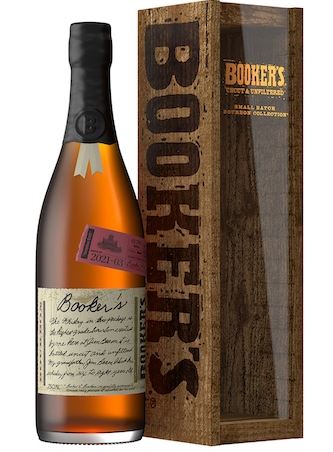 The third and final expression of this series is known as Booker’s Batch 2021-03 “Bardstown Batch.”

Booker’s Bourbon is a rare barrel-strength bourbon, bottled uncut and unfiltered. But you obviously know a good bit about bourbon, because you don’t end up here by mistake. We don’t advertise. We don’t do social media. We just do bourbon.

We focus on the sweet spot.  The center of the rackhouse where the temperature and humidity stars align to create the deepest and most intense flavors. Once it’s aged to perfection, which always varies, the liquid is bottled uncut and unfiltered and that is Booker’s Batch 2021-03.

We don’t add, we don’t water down, and we don’t apologize for it. For some people, it may be too much. But for true bourbon fans, it’s probably the best ever.

Booker was a sixth-generation master distiller who grew up at a distillery in the heart of Kentucky. He was born to bourbon. While others rejoiced to drink bourbon at age 21, Booker was thrilled to start making the stuff.

In 1992, Booker introduced the world to small batch bourbon. He actually coined the term “small batch.” With it came his own signature bourbon, Booker’s True Barrel Bourbon. Inspired by a 200-year-old tradition, Booker’s is bottled uncut and unfiltered.