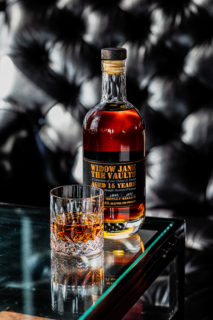 Widow Jane Distillery announced the release of The Vaults 2021, the third edition in an old-and-rare whiskey collection from the New York-based brand fast becoming a seasonal favorite.

The 2021 release marries 15–17-year-old bourbons that have been carefully selected by Widow Jane president and head distiller Lisa Wicker from the brand’s stocks housed at its Conover Street rickhouse in Red Hook, Brooklyn. As rare as its 2019 and 2020 predecessors, just over 3,000 bottles of The Vaults 2021 are being released to the public, in select markets, throughout the fall and winter season.

Complex and rich, this long-aged bourbon delivers a nose of caramel, toasted coconut, cocoa powder, leather, and vanilla over a palate of toffee, popcorn, pecan, graham cracker, and sweet tobacco. A long-lingering dry finish that one will savor, again and again with further notes of clove, burnt sugar, and all-spice.

Each release of The Vaults is intended to deliver intense flavors including a bold but balanced expression of the woods in which each was aged and finished. The 2021 blend of bourbons from Tennessee and Indiana is finished in Adirondack oak casks air-seasoned outside for 42 months.

After the air-seasoning period, the Adirondack oak finishing casks were constructed in a traditional French method, a tighter construction than the American oak from the original aging period, and were given a heavy toast, which has allowed the sugars in the wood to caramelize and enhance the already strong backbone of the whiskey. The casks received a three-and-a-half level char.

The result is an intense whiskey with hints of cream, smoke, and spice. Pour in a glass, allow it to open up, and savor.

As is the case with all Widow Jane whiskeys, like their signature 10 Year Old Bourbon, The Vaults 2021 is non-chill filtered and proofed with the pure limestone mineral water from the legendary Rosendale Mines of New York, just 100 miles north of the distillery, which contributes to the unique mouthfeel and long finish.

Said Wicker, “Blending these older barrels for the Vaults is a privilege. They are mature and beautiful on their own but are elevated when combined. Influencing them with extraordinary oak creates a one-of-a-kind combination. Pour slow and let it open up.”