Click here to view the flipbook for this publication. 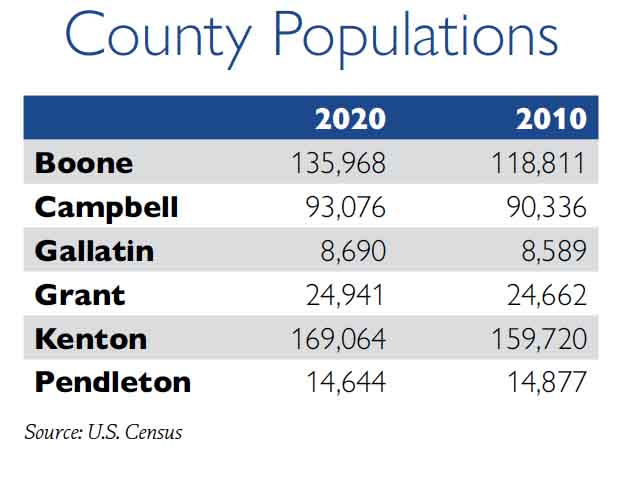 Northern Kentucky is located within a day’s drive (or a 60-minute flight) from 60% of the U.S. population, at the center of where three interstate highways meet. With I-75 and I-71 running through the heart of the region, the transportation and logistics industries play a major role in the area’s economy.

NKY is home to the Cincinnati/Northern Kentucky International Airport (CVG), which offers 165 peak-day flights and is the seventh-largest cargo airport in North America. The Amazon Prime Air hub is located at CVG, along with the DHL Express Global Superhub. Dozens of other logistics and transportation companies are located near the airport, including warehouses for eBay, Amazon and Wayfair.

Other key industries in the region include financial services, aviation and aerospace, food and flavor, life sciences, and automotive. Northern Kentucky’s demographics paint a picture of a thriving, growing and impactful region that is poised to continue to attract attention from business and industry leaders for many years to come.

Some of the region’s top employers include: 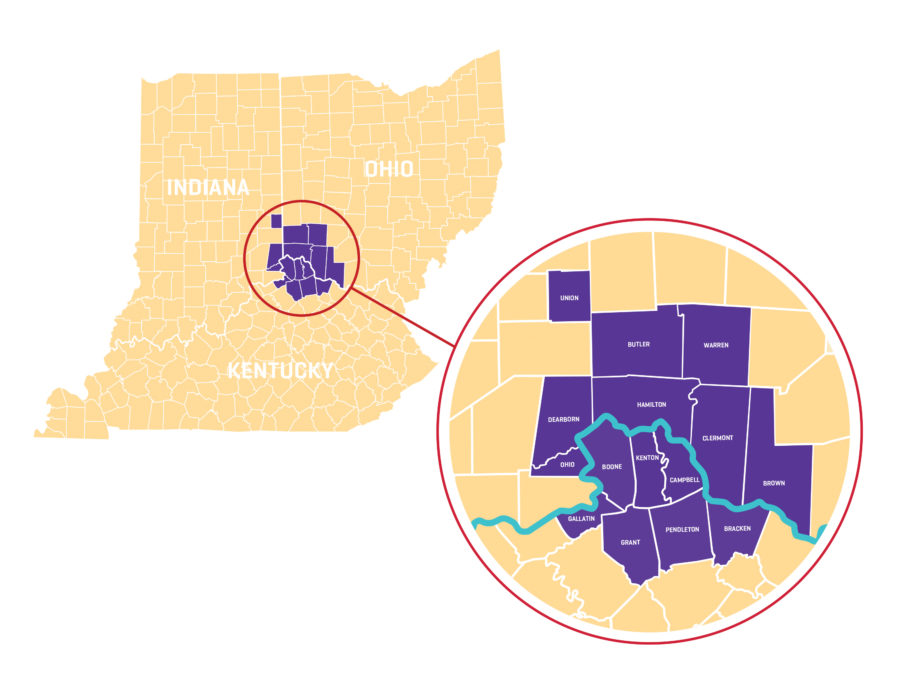 NKY is a region made up of many cities and townships that collaborate on several initiatives, including the health department, convention and visitors’ bureau, public transportation, economic development and more. Six cities are located along the Ohio River: Ludlow, Covington, Newport, Bellevue, Dayton and Fort Thomas.

The largest cities in the region, according to population, are Covington, Florence, Independence, Erlanger, Burlington and Newport.

More than 40,000 residents live in Covington, a riverfront city located at the confluence of the Ohio and Licking rivers that was incorporated in 1815. The city is known for its unique small businesses, historic homes, beautiful architecture, repurposed commercial spaces and innovative entrepreneurial environment.

Located along Interstate 75, Florence is the retail capital of Northern Kentucky. The region’s second-largest city is comprised of a diverse mix of young professionals, families and senior citizens. The city is home to more than 2,500 businesses and is one of the few cities in the region to operate an independent drinking water system and sanitary sewer system.

Located along the Ohio River, Fort Thomas served as a U.S. Army post for many years. Today, the suburban city is home to families and young professionals and is known for its schools and small businesses.

The county seat of Boone County, Burlington is a Census-designated place that is home to over 17,000 residents and numerous businesses.

The river city of Newport is known for its Purple People Bridge, a pedestrian bridge that connects Newport to Cincinnati. The city has many tourist attractions, including the Newport on the Levee entertainment complex and Ovation, a mixed-use development that includes an indoor/outdoor concert venue and more.

NKY’s riverfront cities have quick access to Cincinnati and all its amenities, but NKY is far from being in Cincinnati’s shadow. In fact, Northern Kentucky has it all. Quaint downtowns bustling with development. Prominent universities and a successful community college system. Historic neighborhoods and a booming residential real estate market. Global logistics expertise that is driving growth and bringing more high-paying jobs. Quick access to the best regional airport in North America. Four major-league sports teams and successful high school sports programs that bring the community together. Innovative entrepreneurs and a supportive business community. Exciting riverfront development. Multiple arts and culture venues. A cost of living below the national average.

NKY is one of the largest urban areas in Kentucky. It is a thriving manufacturing center and leader in logistics, finance and technology. It has walkability, world-class restaurants, live music and a variety of craft breweries and bourbon distilleries. It also has an active suburban community with great schools and shopping destinations.