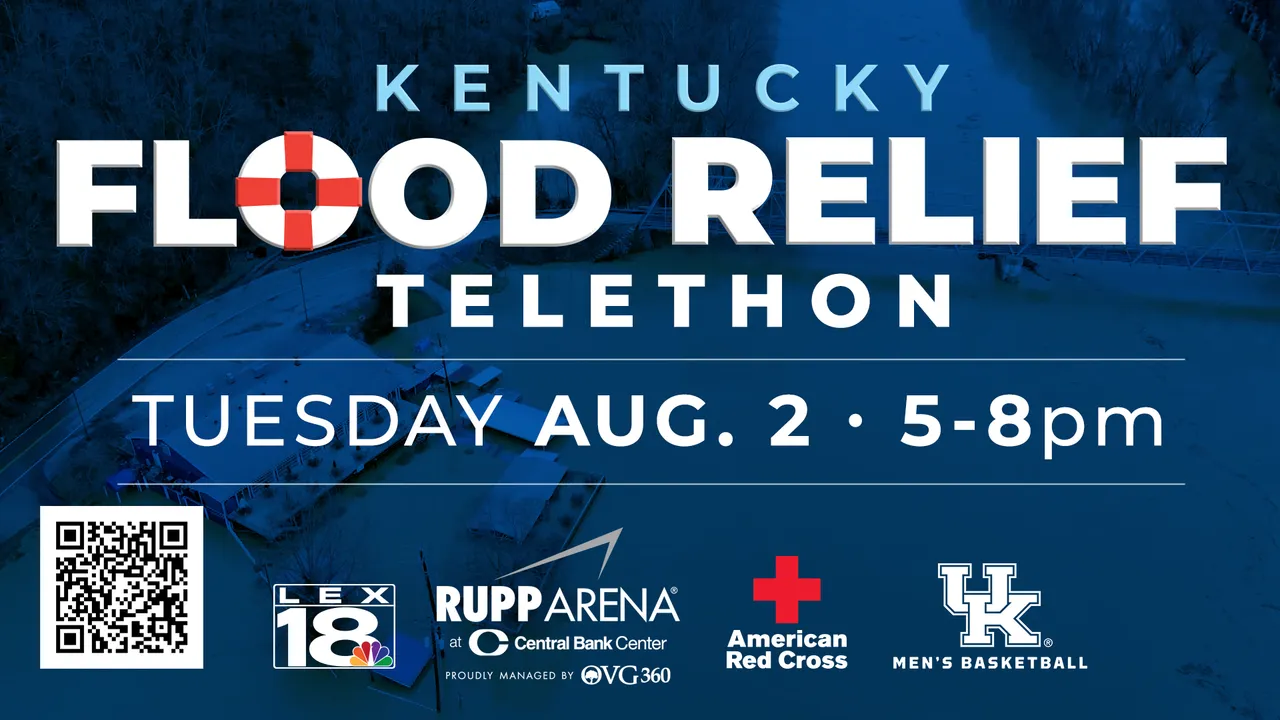 LEXINGTON, Ky. — Humbled by the devastation of the flooding in the state of Kentucky, the UK men’s basketball team and head coach John Calipari will host an open practice in Rupp Arena and in conjunction with Joe and Kelly Craft, the American Red Cross, LEX 18 and Rupp Arena at Central Bank Center – will host a telethon Tuesday from 5-8 p.m. ET on LEX 18.

Doors to Rupp Arena will open at 5 p.m. on Tuesday and donations for the Kentucky Flood Relief will be accepted upon entry. One hundred percent of the proceeds will go to the American Red Cross to benefit the immediate needs of Kentuckians impacted by the floods.

The Kentucky Flood Relief telethon will air on LEX 18, as members of the UK men’s basketball team will take phone calls and donations as well as participate in an open practice. Special guests are expected to participate in the show.

Donations for the Kentucky Flood Relief can begin now:

Mail a check to:

“Our players approached me about helping our state,” UK head coach John Calipari said. “They know that our state is hurting again, and they wanted to do anything they could to help. It was their idea to hold an open practice, and the Red Cross, LEX 18 and Rupp Arena were quick to offer assistance to help make this happen. Joe and Kelly Craft will help host the event as they have in the past. I know we’ve asked a lot in the last few months, but it’s time to help our fellow Kentuckians again with immediate ways to make a difference. The team and I are looking forward to doing what we can, and I know the support of a number of others will mark another unbelievable testament to the kind hearts of the people of this state.”

Seating is not reserved and will be open on a first-come-first-serve basis. The team is expected to begin the telethon taking calls and donations and will take the court at approximately 6:30 p.m.

UK has held four previous telethons under Calipari in conjunction with the Red Cross to assist with natural disasters. In 2010, Kentucky and Calipari used a telethon to raise more than $1 million for victims of the devastating earthquake in Haiti. UK followed that up with another telethon in 2012 that generated $1 million for victims of Superstorm Sandy. In 2017, the team hosted a telethon for Hurricane Harvey victims and raised more than $1 million. In December, UK raised more than $5 million in total efforts for Western Kentucky after portions of the state were impacted by deadly tornadoes. Calipari also helped raise funds for West Liberty, Kentucky, after tornadoes ravaged the town in 2012.