One of the most historic landmarks on the Kentucky Bourbon Trail, Green River Distilling Co. (GRDC)—established in 1885—holds the title of DSP-KY-10, meaning it’s literally the 10th oldest registered distillery in the entire state. That’s not to say the facility has been producing spirits constantly to this day. But the ups and downs of its history tell the tale of a distillery that’s landed on its feet, despite the odds, through 130-plus years.

Founded by John W. McCulloch in 1885 in Owensboro, GRDC went through a devastating fire a decade later, followed by multiple owners, Prohibition, abandonment, and a lengthy period of dormancy before being revitalized in 2014. After two years of extensive renovation and modernization, the business opened in 2016 as the O.Z. Tyler Distillery, named for the visionary who founded the company that purchased the distillery. After a rebranding effort, O.Z. Tyler was replaced by Green River Distilling Co., which then launched its flagship spirit, Green River Kentucky Straight Bourbon Whiskey. Soon the facility was producing more than 90,000 barrels of bourbon and rye per year.

Each bottle of Green River Kentucky Straight Bourbon Whiskey includes the phrase “The Pride of Owensboro” to pay homage to the city, its rich bourbon heritage and its future.

“Back in the day, Green River was known around the world for making some of the best and highest-quality whiskey,” says GRDC Marketing Director Forrest Smallwood. “And its rebirth helps bring the city’s—and western Kentucky’s—rich bourbon heritage back to life.”

As the westernmost stop on the Kentucky Bourbon Trail, GRDC is reviving Owensboro’s pre-Prohibition reputation as an epicenter of bourbon production, with 20 distilleries across the city at that time.

“Many bourbon lovers don’t realize that Owensboro and western Kentucky were among the most important regions for bourbon production in the 1800s,” says Eric Gregory, president of the Kentucky Distillers’ Association.

Now with the support of J.W. McCulloch’s great-grandson, this distinguished distillery has come full circle, reclaimed its name of GRDC, and is ready for its next chapter. In mid-July, GRDC officially became part of the Bardstown Bourbon Co., one of the top 10 distilled spirits producers in the country.

Voted by Travel + Leisure magazine as offering one of the best distilling tours, GRDC has three types of tours.

On the upscale Barrel Thieving tour, participants go upstairs in the rickhouse for a behind-the-scenes look into traditional bourbon whiskey production, including barrel storage and history, then taste from three special barrels that have been selected by the master distiller. Guests learn about every aspect of whiskey production—from grain to mash to beer to distillate to whiskey barrels—and go home with a GRDC Glencairn glass. The Barrel Thieving tour, priced at $45 per person, is available on Tuesdays and Thursdays at 3 p.m. and must be prebooked. 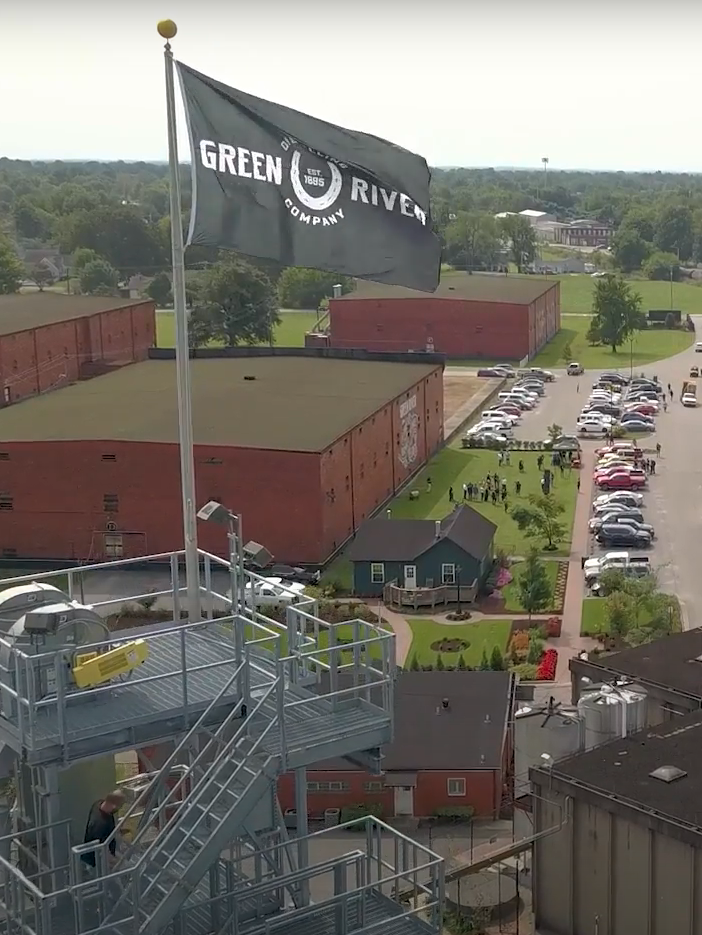 McCulloch’s whiskey took home lots of international awards in its day. J.W. entered his whiskey in as many competitions as possible, winning his first Medal for Excellence at the World’s Fair in 1893. In 1900, the brand won the gold medal for quality and “Best of Show” at the Paris Exposition.

The founder remains of special interest because of the artifacts he created. Recently, a blue and white mini-jug sold at auction for $1,025. While at the distillery, you can peruse a collection of some of those creations. You can also see the McCulloch slogan, “The Whiskey Without Regrets,” in giant letters on the side of the buildings as you walk into Green River, designed and painted by Green River Creative Director Aaron Kizer.

For visitors traveling the Kentucky Bourbon Trail, GRDC is either the first stop or the last stop for those completing their passport. Nearby is the Green River Farm, where cattle feed on stillage (distillery by-product) and oak trees are grown for barrels.

A perfect location for a private event, the distillery offers indoor and outdoor options on its 28 acres. The 9,000-s.f. Bottle House is the distillery’s main event venue and one of the largest in the Owensboro area, accommodating up to 350, or 50 for an intimate dinner.

Several acres of grass and grade-level pavement provide numerous options for stages, tents and support trailers, with a picturesque backdrop provided by clay tile rickhouses and other distillery structures.

Perspective: U.S. Values Will Win the Inflation Fight
Spotlight on the Arts: The Common Wealth of Kentucky