He made the announcement at Walmart in the Hamburg area of Lexington.

Comer said he hopes the project will help increase the number of dairy farmers in Kentucky, which has dramatically declined since 2000. There were 1,500 in 2000; today just over 800, he said.

“This initiative has the potential for more direct farm impact than any program in Kentucky Proud history,” Comer said. “A lot of people don’t know that milk that is processed in Kentucky may still be milk that is shipped in from surrounding states. I want to encourage all Kentuckians to seek out the ‘Udderly Kentucky’ label and buy a product that puts money directly in the hands of our own dairy farmers.”

When Comer proposed the partnership with Walmart, “we knew it was right for these farm families and for the Kentucky community that we serve,” said Tino Soto, a market manager who has served as regional buyer for Walmart. “Our company has exactly the same mission as your Commissioner: Increase farm impact and net farm income on our shelves. Udderly Kentucky is one more addition to our line of Kentucky Proud products that range from Purnell’s breakfast sausage and WindStone Farms jam to Weisenberger Mill flour mixes, central Kentucky produce and much more.”

Funds for marketing were made available through the Kentucky Proud program, which receives its funding from the Kentucky Agricultural Development Board. The Board works to diversify Kentucky’s farm economy and provide more opportunities for growth.

Kentucky Agriculture Commissioner James Comer, third from left, Walmart regional buyer and market manager Tino Soto, left, cut the ribbon on Udderly Kentucky. They are accompanies by representatives from Kentucky dairy farms and Prairie Farms, the facility that will process the milk.

Dairy farmer Dante Carpenter of Russell Springs talks about what Udderly Kentucky means to his family, including daughter Elise. 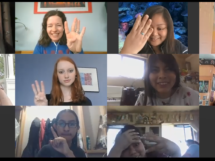 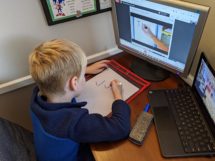 One of youngest known authors publishes book on pandemic

Get rid of your old tires for free