When discussing the fastest growing industries in the United States, “nonprofit” isn’t usually part of the conversation. In reality, though, the nonprofit sector represents a major growth area in the U.S. economy, and one Kentucky university is now offering a master’s degree program to better equip students wishing to work outside the for-profit world.

Dr. Peter Weber, an assistant professor at MSU and director of the NLS program, said the university has been offering study options for those interested in the nonprofit sector since the mid-1980s. “Major changes” in that sector in the 1980s and 1990s, he said, eventually led to MSU’s decision to offer the master’s degree.

“In terms of employment, the nonprofit sector grew an estimated 17 percent between 2000 and 2010, outperforming both the public and private sectors,” Weber said. “The real need we saw was to address what a lot of students identified as a lack of leadership in the nonprofit sector.”

Weber said the program currently has four full-time faculty members and uses multiple adjuncts. Classes are offered both online and in-person. Three students started the program fresh this fall, Weber said, and others have switched into it. The program already is collaborating with multiple local and regional nonprofit organizations to provide students an opportunity for hands-on experience in the nonprofit world.

According to statistics from the Kentucky Nonprofit Network, one in nine Kentucky workers is employed by a nonprofit agency. Kentucky nonprofits’ revenues topped $22.6 billion in 2012, a year in which the Bureau of Labor Statistics reported 1,836,700 employees worked in Kentucky’s nonprofit sector.

“We found that the nonprofit sector is the state’s third-largest employer,” said KNN Executive Director Danielle Clore. “A lot of folks discount the economic impact of nonprofits. They are businesses. Some use volunteers, but that’s not always the case.”

Clore sits on the advisory council for MSU’s program. She calls the university’s online component “critical,” and while not discounting any of Kentucky’s other nonprofit educational efforts, she is happy to see MSU stepping up to take nonprofit training to a higher level.

“The void I see is something really comprehensive,” Clore said, referring to nonprofit degree programs. “There’s definitely a void in graduate schools for folks who want to have a career in the nonprofit sector or are already working there.”

Weber and Clore agree that one of the key functions of nonprofits is to provide services on a local, community level. Nonprofit organizations, Clore said, can provide access to healthcare, offer access to educational opportunities and promote the arts, for example. Weber, who is from Europe, said many Americans do not realize that nonprofits do not always function as freely in the rest of the world in the way they do here.

“I think nonprofits provide vital services to a vast population,” he said. “I think nonprofits in the U.S. are a symbol of diversity. Everybody can establish a nonprofit in the United States and contribute to society. They allow multiple voices to be heard.”

“Virtually all nonprofits are there to contribute to society,” Clore said. “Our view of inspiring the community is a high-level view. Your goal is, ironically, to put yourself out of business: If you’re fighting hunger, for instance, you want to alleviate that.”

On average, Kentucky is a very charitable state. In the 2012 report “How America Gives, Chronicle of Philanthropy,” Kentucky ranked 16th for percentage of charitable income given in 2009. Kentuckians who itemized deductions on their tax returns had an average contribution of $3,394 in 2011, according to the National Center for Charitable Statistics.

Considering most nonprofits are supported by charitable giving, these numbers bode well for the growing sector, but Clore said nonprofits must be vigilant in promoting themselves to stay vital. A large component of nonprofits’ sustaining success is derived from making sure the people who work for them are receiving adequate training to work in the field, she said, which makes programs such as MSU’s even more important.

“Your goal is to get and retain the best employees you can, and you can’t do that without paying them,” she said. “That requires a good salary and benefits package. A degree really sets someone apart.”

NLS courses are open to students majoring in all disciplines.

“Our aim is to give students an understanding of the culture of nonprofits,” Weber said. “You need to know the ins and outs of nonprofit leadership. You need to be able to anticipate and understand social needs and how to address them by asking the right questions.”

After she graduated college, Clore said she worked only one year in the for-profit sector in the field of sports marketing. Her job now involves being an advocate for other nonprofits, providing training to nonprofit leaders and generating revenue to keep KNN in operation. Even before that, however, she realized the importance of the nonprofit sector and was drawn to its unique blend of service and purpose.

“At the end of the day, I hadn’t really done anything of value,” she said. “I think there are people who are really passionate about a career that gives something back.” 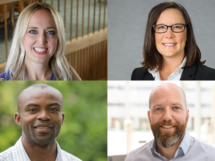 Spotlight on the Arts: October 2015