Stable conditions for Kentucky healthcare finances, but chronic uncertainty remains in the prognosis

With news on the sector’s financial status a whirl of uncertainty, upheaval and contradiction, it’s easy to speculate Kentucky’s healthcare industry is in an economic downturn. However, there is plenty of evidence to show the news is more good than bad.

A few hospitals did, indeed, close soon after implementation of the Affordable Care Act. But Elizabeth Cobb, vice president for health policy at the Kentucky Hospital Association, points out that there have been no hospital closures in the past several years and revenue from Medicaid expansion has stabilized several community hospitals that were considered financially at risk in 2014.

In general, Cobb said, Kentucky’s healthcare provider industry is much more stable now than earlier this decade. Medicaid expansion is partially responsible because residents who gained insurance coverage sought care and created a revenue surge. More importantly, she said, provider systems have shifted away from overreliance on inpatient hospitalization to generate income.

Hospitals responded to the ACA’s push for better patient outcomes with value-driven approaches to care that emphasize outpatient services, home health and rehabilitation.

“It’s been proven that patients recover better at home than in a hospital bed,” Cobb said.

However, the positive has been offset by well-publicized developments likely to skew perceptions negatively. Months of efforts in Washington to “repeal” the ACA were accompanied by news of organizational setbacks among large Kentucky hospital systems.

In May, KentuckyOne Health cited “significant challenges in the healthcare industry” as the reason it severed a management deal with 404-bed University of Louisville Hospital and announced its intention to sell most of its Greater Louisville properties, including 462-bed Jewish Hospital, Jewish Hospital-Shelbyville and affiliated KOH medical centers in Jefferson County.

In March, another major Kentucky health system, Baptist Health, announced it was cutting 288 full-time positions – roughly 1 percent of its employee base – and changing its top management.

The cuts may offset the cost of Baptist’s 2016 acquisition of Floyd Memorial Hospital in New Albany, Ind., continuing systemwide implementation of the Epic electronic health record network and losses from the organization’s foray into health insurance, Baptist Health Plan (formerly Bluegrass Family Health). The organization also is completing a massive $246 million expansion of Baptist Health Lexington and major renovations to other member hospitals.

A Baptist Health news release on the reductions clarified that most cuts were administrative personnel from corporate headquarters in Louisville. Few, if any, were from its 320-plus care-provider operations. Some of its eight community hospitals had no cuts.

In its 2016 annual community report, Baptist reported total revenue of $2.13 billion but provided no income data.

In terms of revenue performance, Todd Jones, Baptist Health Richmond’s president, said his hospital is on far better financial footing in 2017 than it was in 2012 when the former Pattie A. Clay Hospital formally joined the health system.

“We’ve made capital improvements, recruited new physicians in primary and specialty care, added new services, and offset some of the perennial challenges we face relative to reimbursement,” Jones said. “Since becoming a Baptist hospital, we are offering better care and access to care to our community.”

The community has responded with improved utilization of the Richmond hospital’s expanded array of services – particularly outpatient services, he said.

Norton’s annual report shows a positive margin of $89.3 million for patient services with total revenue from all sources at $2.09 billion.

UK Healthcare’s financial statement for the fiscal year ending in June 2016 reports a healthy positive margin of $125.1 million on $1.42 billion in operational revenue. Its 2015 results were even better, with $199.2 million in income on $1.33 billion in revenue.

St. Elizabeth Healthcare’s public filings to the IRS report that its expenses were $86.8 million less than its total revenue of $1.01 billion in 2015, with the comparable 2014 figures having been $105 million derived from revenue of $984.2 million

(NOTE: KentuckyOne Health and the Kentucky Cabinet for Health and Family Services were asked to be interviewed for this article. KentuckyOne Health declined to comment. The CHFS acknowledged receipt of a request for an interview and questions regarding the Medicaid program, but no one in the cabinet responded.)

When Kentucky Medicaid expansion was first implemented in 2014, hospital administrators worried that expanding eligibility to families with incomes up to 38 percent above federal poverty guidelines would negatively affect their payer mix by shifting patients from commercial insurance to Medicaid, which pays less reimbursement for services.

Additionally, expansion would move many uninsured self-payers, who often can’t pay, to Medicaid, which would bring more patients and more revenue, but Medicaid reimbursement levels oftentimes do not cover providers’ costs. For example, Norton Healthcare’s tax filings for 2016 show Medicaid reimbursement was 14 percent less than the cost of providing care.

There was, indeed, a big shift onto Medicaid rolls in Kentucky.

Kentucky had the second-largest decline in its uninsured population in the country when it expanded Medicaid eligibility, according to a Foundation for a Healthy Kentucky report released in February 2017.

“The commonwealth’s uninsurance rate has been cut by more than half, from 13.6 percent (of state residents) to 6.1 percent in 2015,” the report states. There was an increase in individual health insurance coverage, from 4.4 percent to 5.3 percent, and a huge increase in Medicaid/KCHIP (Kentucky Children’s Health Insurance Program) enrollment: from 13.4 percent of commonwealth residents to 19.8 percent. By the third quarter of 2016, “more than 500,000 Kentuckians were enrolled in Medicaid through the expansion.”

And those numbers have continued to climb. As of March 2017, Medicaid/KCHIP covered 1,246,349 people in Kentucky, according to federal Centers for Medicare and Medicaid Services (CMS) estimates. That’s nearly 640,000 more since expansion began in fall 2013.

Contrary to fears, however, that 103 percent increase was mostly among self-pay patients coming onto Medicaid, according to the payee mix shifts reported by St. Elizabeth, Norton Healthcare and Baptist Health Richmond.

“We did not see much of a drop in our commercially insured population, though we expected it,” said Norton’s Gough. The population of income-earning Kentuckians within the eligibility threshold – between poverty level and 38 percent above it – was narrow and didn’t end up making that much of a difference in Norton’s overall mix of payers.

Baldwin estimated about 10 percent of St. Elizabeth’s patient population was self-pay before Medicaid expansion. Since expansion, that number has dwindled to about 2 percent, she said.

In St. Elizabeth’s Northern Kentucky service area, among the more populated portions of the commonwealth, “70 percent of our patient population is either Medicare, Medicaid or self-pay,” Baldwin said. That leaves 30 percent of St. Elizabeth’s patient base commercially insured, she said, making its population characteristics more similar to Bowling Green than to a city the size of Louisville.

The impact on revenue from shifts in payer mix depends on the demographic makeup of a hospital’s service area. In contrast to Northern Kentucky, Baptist Health Richmond serves a much more diverse range of incomes. It has a much greater number of working families earning hourly and retail wages.

Richmond experienced a significant shift in payer mix from patients formerly covered by insurance to Medicaid coverage. Meanwhile, Jones estimates the hospital lost 2 to 4 percent of its private payers. In addition, the hospital experienced revenue losses due to continuing government sequestration of Medicare funds and other cuts. The cumulative losses at Baptist Health Richmond could go into the millions by 2020, he said.

Overall, though, the increase in Medicaid enrollment has produced a significant net gain on most hospital revenues across the commonwealth. According to the Kentucky Hospital Association, rural hospitals have been helped tremendously by providing a federal payer where there once was just mounting bad debt owed by private payers.

The effect on Norton’s revenues has been profound. For the last three years, Gough said Norton has operated at somewhere close to a 5 percent profit margin.

“Our goal each year is a 2 percent margin,” he said. “The last few years have produced something of a windfall.”

The unusual margins are not exclusively the result of Medicaid expansion, Gough said. A significant contributing factor was that Norton Healthcare system has completed a more than $200 million electronic health record system investment, and getting that cost off the books made a substantial contribution.

However, Gough sees no way the revenue momentum can continue. Federal subsidies to states paying 100 percent of the additional cost of Medicaid expansion conclude this year. If Kentucky stays with expansion, subsidies will recede every year until 2020, when CMS will cover 90 percent of Medicaid costs. States will have to fund the rest. And that’s dependent upon whether Kentucky stays with the Medicaid exchange as the ACA legislation intended.

Another change likely to affect Kentucky’s Medicaid program is Gov. Matt Bevin’s proposal for a Section 1115 waiver from the CMS to redesign Kentucky’s Medicaid expansion. According to the Health Insurance Resource Center at
healthinsurance.org, the governor’s proposal, Kentucky HEALTH, would not eliminate the expansion, but would introduce several key changes to the program.

One would be a My Rewards Account program that requires Medicaid enrollees to complete certain actions, such as earn a GED, participate in smoking cessation classes, or get job training, to earn credits for vision and dental services. Medicaid typically covers 100 percent for beneficiaries, but the administration’s proposals include creating deductibles for recipients as an incentive to “avoid unnecessary care.”

In the meantime, decreases in uncompensated care – bad debt on hospitals’ books – seem to have reached a plateau. The increase in insured patients has seen a simultaneous rise in purchases of health insurance plans with high deductibles.

“A lot more people are going to high deductible plans, so the residual balance that the commercial payers don’t cover, well, there’s more of that these days,” Baldwin said.

A great deal of Baptist Health Richmond’s current bad debt comes from patients who’ve bought high deductible insurance plans, upward of $2,000 to $6,000. Of greatest concern, however, is that commercial insurers are getting out of state and federal exchanges. In Kentucky, Aetna and Humana have already bowed out of the Kentucky market for 2018, leaving only Care Source and Anthem. Anthem has already announced that it will no longer participate in the exchange in Indiana and Ohio. It is also pulling out of nearly all its markets in California.

“It’s very possible that Kentucky could have just one choice in the exchange by 2018,” Baldwin said. Despite what looks like rising hazard for hospitals’ future bottom lines, Baldwin argued that it would be a mistake to return to the past.

“Lifting the Medicaid eligibility threshold made a huge difference to families with only one income. This area has a large population of single, working mothers,” Baldwin said. “I don’t think anyone could reasonably say that it’s appropriate to take Medicaid back to where it once was. That would be too dire, too draconian.” 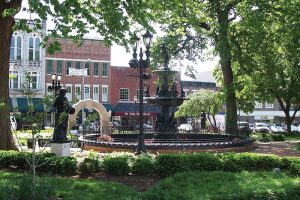