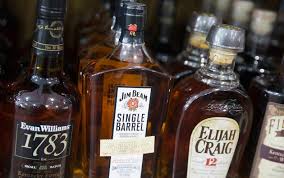 FRANKFORT, Ky. (March 2, 2018) – The Senate passed a measure yesterday to preserve the status quo in determining how many package liquor licenses are issued in individual cities and counties by a 32-4 vote.

The measure, known as Senate Bill 110, would do that by codifying in law rules that limit the number of licenses available for retail package liquor stores. Currently, the number of licenses is limited based on the population of a given community. That number is generally capped at one license per 2,300 people for package stores.

He said voters who backed recent ballot measures allowing liquor sales in their communities did so knowing how many liquor stores would be permitted under the quota system. Those voters never anticipated that the state would later lift the caps on the number of alcohol licenses issued in any one city or county, Higdon said.

Out of Kentucky’s 120 counties, 89 are wet or have wet cities. Higdon said five of those counties and 28 cities have reached their quotas for retail package liquor stores.

An amendment filed by Sen. Wil Schroder, R-Wilder, would ensure quotas for retail drink licenses would not be codified into statute.

He said the Northern Kentucky counties of Campbell and Kenton need more retail drink licenses – partly because of their proximity to Cincinnati. Schroder said a waiting list for these specific types of licenses is impeding economic development in Northern Kentucky.